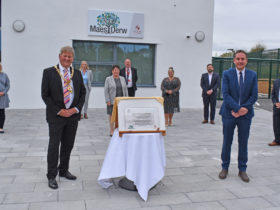 BBC broadcaster and author Huw Edwards has been awarded a PhD at a graduation ceremony at the University of Wales Trinity Saint David’s Lampeter campus.

Huw, who received a fellowship from the university 12 years ago, was congratulated by Professor Medwin Hughes, on receiving his doctorate for his research into Welsh Chapels in London and Llanelli.

“It’s 12 years since I was here to receive an honorary fellowship which was a great day but today is an even bigger day because I am receiving my PhD after 7 agonising years of hard work on the history of the welsh chapels in the 18th century. So it’s a great day and it’s a great university and I’m delighted to be here.”

“We are delighted to be able to celebrate Huw’s success today. His work on non conformity in two places very dear to him – London and Llanelli – is a major contribution to the history of religion and culture in wales and beyond.”

Huw was born in Bridgend but from the age of four, was brought up in Llangennech, near Llanelli. He was educated at Llanelli Boys’ Grammar School and graduated with a first-class honours degree in French from University College, Cardiff, in 1983. As the BBC News lead presenter for major breaking news in the United Kingdom, he presents Britain’s most watched news programme, BBC News at Ten, the corporation’s flagship news broadcast.

The title of the lecture was Ar drywydd y ‘Ginshop’: Capeli’r Cymry yn Llundain (On the trail of the Ginshop: the chapels of the London Welsh.