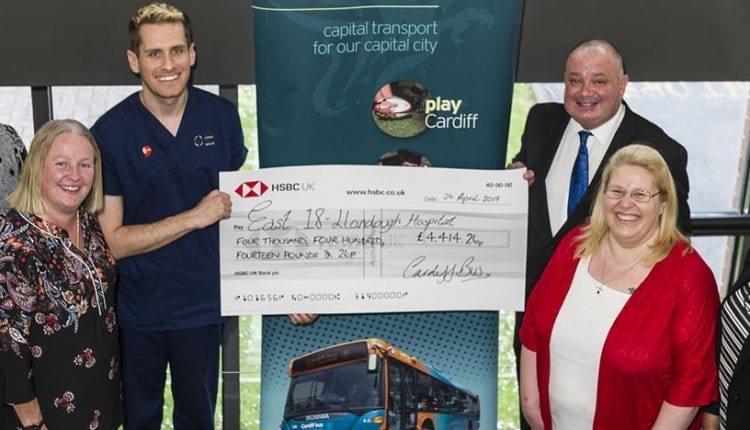 Dementia patients at a local hospital are “over the moon” with a donation of over £4,300 from generous staff at Cardiff Bus.

People being treated for dementia and other progressive brain diseases at Ward East 18 in Llandough Hospital received the donation from staff at the bus operator’s head office this week.

The charitable funds were presented after Cardiff Bus named the specialist ward as its chosen charity of the year in 2018.

Now, thanks to their tireless efforts, £4,379 has been donated to the ward, which will enable patients to benefit from tactile panel boards.

Patients can touch and interact with these boards, which have been shown to reduce anxiety and distress in people with dementia, by helping them stay physically and mentally active as well as reducing boredom.

Unforgettable day clocks, which project the time onto walls as well as talk to patients to remind them of the time, will also be bought. This will help re-orientate patients who are prone to confusion, by helping them to differentiate between day and night.

The remainder of the money will be used to help buy furnishings and equipment to help make their stay more comfortable.

Cynthia Ogbonna, managing director at Cardiff Bus said they were delighted to have been able to raise money for “such a deserving” ward whose staff are an inspiration when it comes to caring for those with dementia.

She said: “It has been our absolute pleasure to support the work of Ward East 18 at Llandough Hospital this year.

“Having witnessed the invaluable work they do to support people with dementia, our staff have been only too willing to help raise funds wherever possible for this incredibly deserving ward.

“Both the staff and patients were over the moon when we presented the cheque this week, and we now hope that this money will go some way towards providing more equipment or enhancing facilities for all those being treated.”

Katherine Martinson at Llandough Hospital said they “couldn’t thank Cardiff Bus enough” following the donation and said they were “thrilled with the funds raised”.

Ward Manager for East 18, Craig Walters said: “We are very grateful for the generous amount of money raised and donated by Cardiff Bus. This will assist East 18 to continue with its commitment to enhancing the patient experience on the ward.”