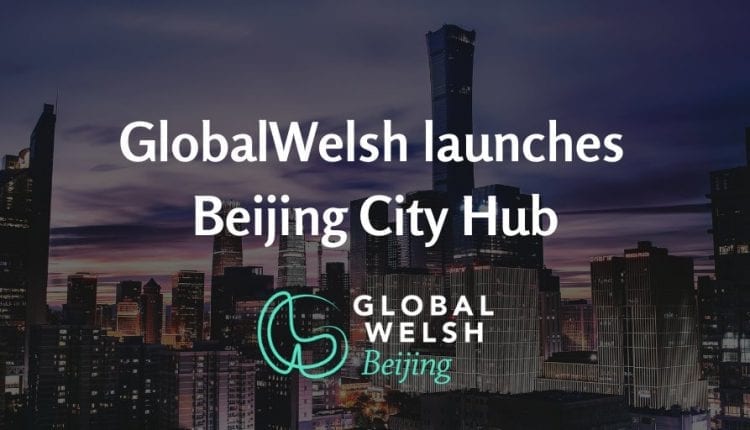 GlobalWelsh, Wales’ independent, not-for-profit diaspora organisation has launched a new City Hub in Beijing. GlobalWelsh Beijing is the third City Hub to be launched in the past 12 months and is headed up by Cardiff-raised Ling Lai.

As Wales faces the continuing uncertainty of Brexit, it’s more important than ever that it boosts its international links and makes its own opportunities, a role which City Hubs have been working to fulfil since they were first launched last year.

The aim of the City Hubs is to provide a forum for GlobalWelsh community members to connect with like-minded members and uncover opportunities on both a local and global level via the soon-to-be-launched GlobalWelsh Connect. City Hub members are also able to take part in local GlobalWelsh events and initiatives such as GlobalWelsh Academyand GlobalWelsh Investor Portal. For GlobalWelsh members looking to relocate, travel, find investment or do business, City Hubs offer an on-the-ground intermediary which can offer introductions and support.

GlobalWelsh Beijing’s initial focus will be to grow the network in the Chinese capital as well as facilitate business, networking and mentoring opportunities. From its base in Beijing, the City Hub will give Wales a greater voice in the world’s second-largest economy and allow China to discover what it has to offer. There will be a strong focus on unearthing inward investment opportunities for Wales and supporting further development of the GlobalWelsh Investor Portal, which aims to bring together investors and entrepreneurs.

GlobalWelsh Beijing host Ling Lai was born in China and grew up in Cardiff. He left Wales following his graduation from Cardiff University in 1987 and went on to forge a corporate and investment career working with the oil majors and a Chinese global investment conglomerate in CFO and CCO roles. His career began in London and has taken him to China, Vietnam, Iraq and the Asia-Pacific. Ling currently lives in Beijing and is on the board of a Chinese-owned UK aviation company which brings him back to Wales regularly. He comments:

“My heart, and my time, is split between Wales and China. Over the years I have noticed the untapped opportunities between Wales and China and have grown passionate about unearthing this potential. GlobalWelsh Beijing is the perfect platform on which to do this and I am very excited to lay down some deep roots for Wales in China and tap into the passionate Welsh diaspora in Beijing. This is something we have been working on since last summer, so I am very excited to finally announce this and start growing a strong community here in Beijing”

Ling is currently building a core team of other passionate GlobalWelsh members in Beijing. The launch team so far includes Sophia Zhang, a senior public relations professional who studied at Cardiff University; Joshua Dummer, a journalist from Port Talbot; and Aileen Yu, a HR professional from China.

Walter May, founder and CEO of GlobalWelsh, comments:

“It’s never been so important for Wales to strengthen its ties internationally. As the world’s second largest economy, China offers massive potential for Wales, especially when it comes to inward investment and trading opportunities for Welsh businesses.

‘Ling is an accomplished businessman with a strong international network and a good team around him. I am excited about GlobalWelsh Beijing and the chance to foster new connections and uncover new opportunities for the GlobalWelsh community and for Wales.”