[aoa id=”1″]Welsh Government approval will now be sought to further progress Dragon Energy Island proposals which include a tidal lagoon.

Subject to approval, next steps will include further project research and financial analysis before the search for a private sector delivery partner potentially gets under way. 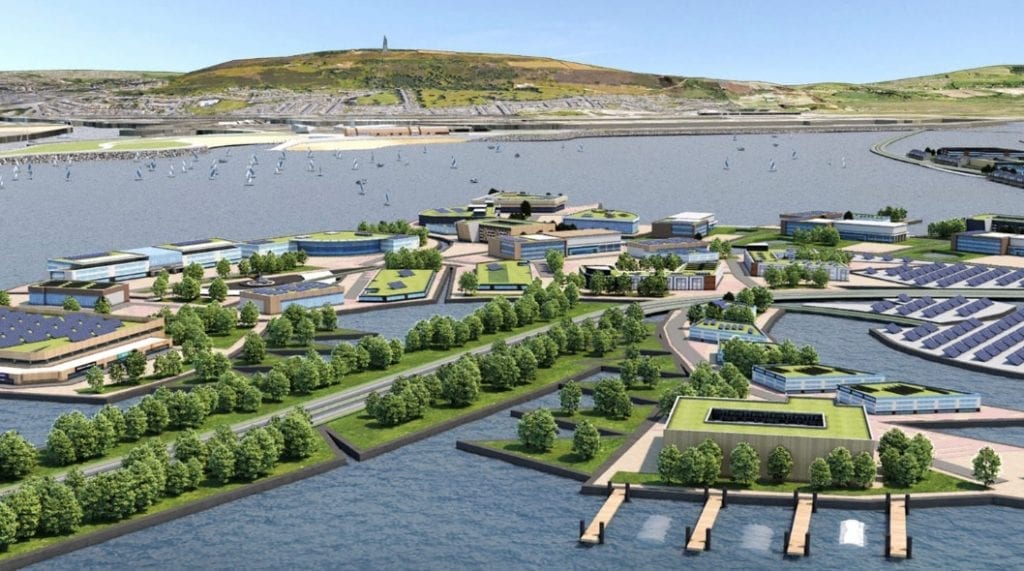 Dragon Energy Island conceptThe request to the Welsh Government follows a meeting of the Swansea Bay City Region’s Joint Committee this afternoon (Tuesday May 28), where members were updated on the findings of an independent report into the project’s viability.

The report also says there’s potential to make savings of up to 30% on the capital costs of the re-imagined project when compared with previous tidal lagoon proposals.

Earmarked for a site within the footprint of previous tidal lagoon proposals off the Swansea coast, the development would include giant underwater turbines that will harness the power of the sea to generate zero-carbon energy for Swansea and beyond.

This follows on from examples of other innovative floating housing schemes in the world – including Holland.

Cllr Rob Stewart, Chairman of the Swansea Bay City Region’s Joint Committee, said: “Seeking Welsh Government approval to take next steps shows how committed we are to realising our ambition for a world class renewable energy development in Swansea Bay.

“The imaginative Dragon Energy Island idea was developed by a tidal lagoon taskforce with representation from the public and private sectors across South West Wales, so it was important to update City Region leaders on our progress. This reflects an enormous amount of hard work behind the scenes for many months in the pursuit of an innovative solution that will put Swansea Bay on the world map.

“Experts have told us the Dragon Energy Island plans are both financially and commercially viable, with engineering specialists backing the inclusion of floating, modular housing as part of an integrated overall development.

“Subject to Welsh Government approval for the completion of further detailed financial work, the search for a private sector delivery partner could potentially get under way later this summer.

“This project represents a major opportunity to place Swansea and the City Region at the forefront of worldwide renewable energy innovation, while supporting local businesses, generating thousands of jobs and creating export industries of global significance.”

Ed Tomp, Chairman of the Swansea Bay City Deal’s Economic Strategy Board, is also a member of the tidal lagoon taskforce.

He said: “I am a very big supporter of this project. It could place the City Region and Wales at the forefront of decarbonisation and new technologies.”

Other Dragon Energy Island features could include an underwater data centre, a solar farm and the production of pure hydrogen and pure oxygen on site for storage or sale.

The potential for a public procurement arrangement which could see councils and other public sector organisations buying electricity directly from the energy island will also be explored.

The Holistic Capital report followed the publication of a PIN notice to test whether companies were interested in helping to deliver the re-imagined project. Eleven companies expressed interest, including several major global corporate companies.

Construction could start in 2021, with the Dragon Energy Island potentially operational by the end of 2026.