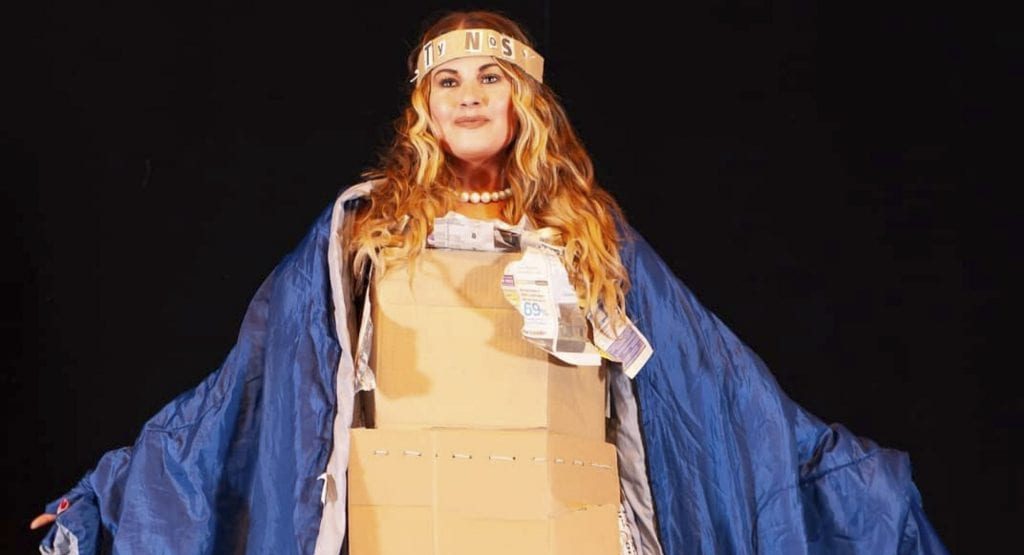 A hospital worker determined to highlight the plight of homeless people paraded the catwalk at a top fashion show wearing cardboard boxes, sheets of newspaper and silver foil.

Catrin Stace-Jones, an operating department practitioner at Spire Yale Hospital in Wrexham who is also a successful plus-size model, donned the ‘statement dress’ she made herself at a Miss Voluptuous Pageant staged in Warrington and the incredible outfit helped earn her runner’s up position for the Wales area. 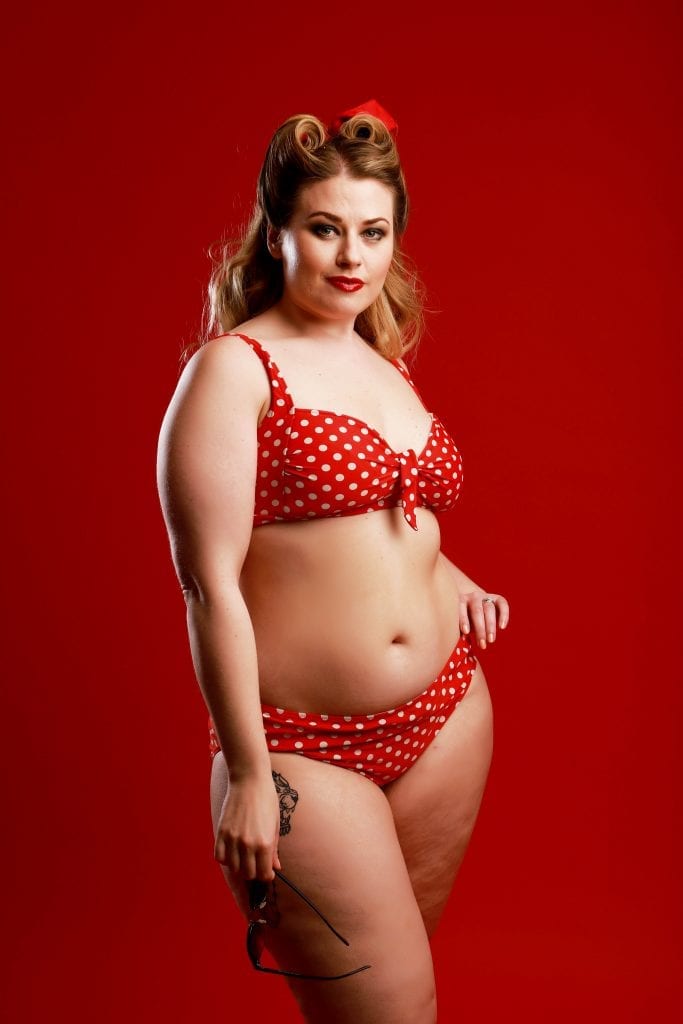 “I was so pleased, not just for myself, but because raising awareness about homelessness is massively important to me and to my colleagues at Spire Yale Hospital.”

Now Cat and Spire Yale co-workers have turned their love of fashion into a creative way to help people living on the streets stay warm through the wet, icy cold days and nights of winter by holding a pop-up eco fashion shop in the hospital lounge.

Cat explained: “People brought in clothes items, shoes and accessories they no longer wanted, and we sold them at £1 per item. It was like a massive clothes swap which allowed people to get rid of items they no longer wore and also buy something different.”

The sale raised £90 which was then spent on buying vital clothing for Tŷ Nos homeless shelter, Holt Road, Wrexham.

Cat first contacted shelter manager Andrew “Ed” Edwards to ask which clothes the homeless people who use the shelter are most in need of.

“The answer is socks and boxer shorts, our users are forever asking if we have any socks for them,” said Andrew, who is more widely known as Ed to his family and friends. 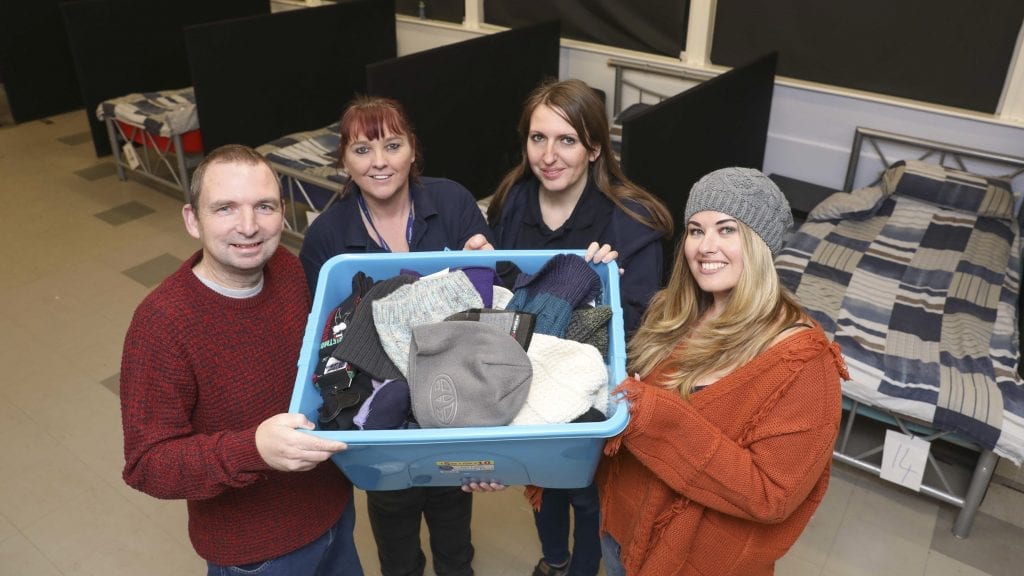 He has worked at the shelter, run by Clwyd Alyn, since it opened 11 years ago and knows most of the homeless people in Wrexham.

He said: “We’re hugely grateful to Cat and the team at Spire Yale. They have supported us for the past three years now and their contribution is invaluable. Tŷ Nos relies on donations of clothing to help keep our homeless users warm. This is particularly so over winter when the weather is bad but living on the streets is tough whatever the season, so we need help throughout the year.”

Andrew firmly believes that the homeless hostel has saved lives thanks to its 16 overnight beds plus shower facilities for users.

He said: “We have a team of four staff and we’re open every night from 8pm until 8am/span> for men and women who have nowhere else to go to have a safe, warm bed for the night. We provide a hot meal and the option to have a hot shower.

“We’ll also point them to organisations which can steer them towards a life off the streets, search for accommodation and maybe find a way back into work.”

Local businesses including Rowan Foods and Greggs bakers regularly donate food to the hostel, including microwave meals and pasties.

At Christmas Ed’s wife, Rusella, also goes in to cook up a traditional Christmas dinner.

Tŷ Nos is 94 per cent full most nights and Cat is already thinking of new ways to help the hostel after being horrified to discover Wrexham has the second highest number of homeless people on the streets of Wales after Cardiff.

She said: “It’s distressing to think in this day and age there are so many people living rough in our community. What’s important to remember is that this can happen to anyone. Many people are made homeless through no fault of their own. All it takes is for a person to lose their job, suffer ill-health which stops them working, or even to go through a relationship split up and have to move out of the home they shared with a partner. When you have little funds and no job it isn’t easy to find a place to live and many people can slip into homelessness through unfortunate circumstances just like this.”

Cat first started fundraising for Tŷ Nos after chatting to a homeless person in Wrexham whose life had unravelled in this way.

She said: “It made me think how a simple shift in a person’s circumstances can radically alter their lives.”

That Christmas she suggested to colleagues at work that instead of doing a Secret Santa gift exchange among staff, they all bring in food, clothing, toiletries and other essentials to donate to the hostel.

The appeal resulted in 15 boxes full of donated goods. Following on from that first event, Cat and hospital friends have run other collections and organised fundraising activities for the hostel including a sponsored walk up Mount Snowdon.

The eco-fashion shop is their latest success story. As well as buying brand new items for Tŷ Nos with the proceeds, Cat shared clothes left over from the sale between Tŷ Nos and local charity shops.

She said: “It made no sense to donate items like high heel shoes to Tŷ Nos. Its users need more practical clothes donations, like waterproof, trainers, fleeces, jumpers and winter coats to keep them warm and dry. So, we gave those sorts of clothes to Tŷ Nos and the rest went to other charities.”

Over the holiday period she is continuing to collect donations for the shelter, adding: “What’s especially useful is any unwanted toiletries people have. Perhaps they have been given an excess of them as gifts. Instead of leaving them on a shelf at home they could be put to good use at the hostel.” 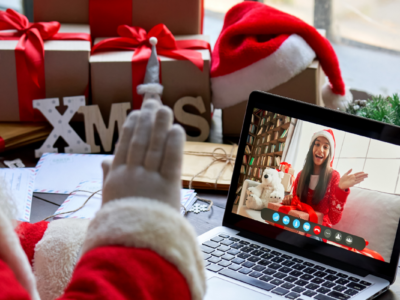 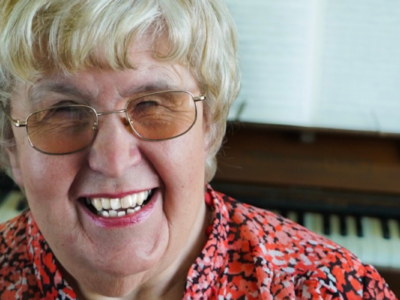 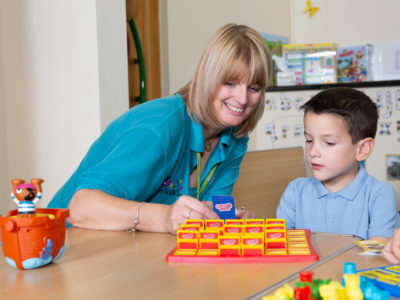 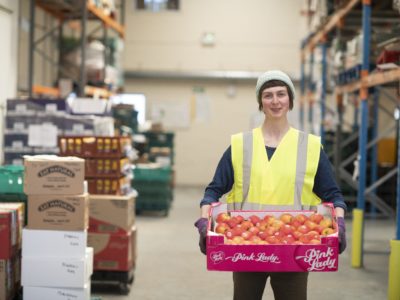