A Welsh music festival that has seen significant growth in recent years will open its doors for an extra night this year following its biggest turnout in 2018.

Organisers of Tafwyl have partnered up with Wales’ first music distribution and promotions company, PYST to present an evening of music, arts and street food in Cardiff Castle on Friday 21st June, 2019.

With free entry, the evening promises to pull in crowds ahead of the weekend event with an impressive line-up of artists.

Over the years Tafwyl has grown from a small fete to a popular two-day event at Cardiff Castle with an audience of more than 40,000 people attending last year.

In recent years, the number of attendees to Tafwyl from outside Cardiff has risen, with 26% of attendees travelling in to the city center to attend the festival.

Recent Welsh Government funding aims to extend the reach of the festival beyond Wales and continue its success for the future.

“It’s wonderful to see home-grown, ‘Made in Wales’ events flourish, which is why the Welsh Government is proud to support events like Tafwyl – and see them grow further and showcase Wales as a vibrant, dynamic and outward looking nation. This award of funding supports the growth of the Festival particularly in attracting visitors from outside of Wales, and alongside the Urdd and National Eisteddfod, Tafwyl has grown to become one of the main cultural event in the calendar for Welsh speakers.

“The appeal of Tafwyl is that it is also accessible to non-Welsh speakers, attracting many people who wouldn’t often attend an event where Welsh is the main language. Cultural events like Tafwyl are vital in attracting a new audience and are instrumental in growing the Welsh language by 2050.”

A big city operation, the festival is supported by a range of partners including FOR Cardiff, Cardiff Council and The Arts Council for Wales. The event is organised by Menter Caerdydd.

“FOR Cardiff are delighted to support Tafwyl’s Friday night opening to help the festival grow. We wanted to maximise the presence of such a brilliant event to ensure people in the city centre could take advantage as well as providing another reason for people to come to Cardiff.”

The main beauty of Tafwyl is that it is a free event, in an amazingly central iconic location in the city centre, making it a hugely accessible event for everyone; being a Welsh speaker or a total newbie to the language and culture.

Not ‘just a music festival’, Tafwyl hosts a range of food and drink, literature, arts, sports, comedy and children’s programmes, with the fringe events held in the run up to the weekend festival. 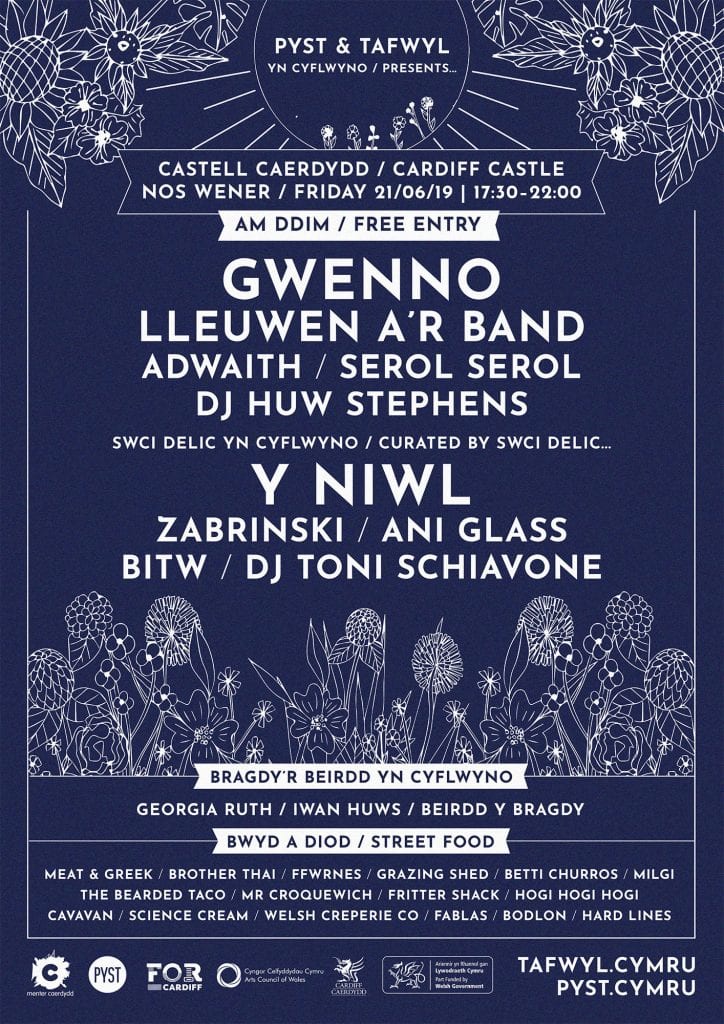 The Friday night event will feature a range of Welsh artists across two stages. Performing on the main stage will be Gwenno, Lleuwen a’r Band, Adwaith, Serol Serol as well as Huw Stephens who will be DJing between acts. The Y Sgubor stage, curated by Welsh visual artist Swci Delic, will feature Y Niwl, Zabrinski, Bitw, Ani Glass as well as Toni Schiavone who will be DJing between acts. In addition to the incredible music, there will be plenty of street food and drink stalls available including delights from Ffwrnes Pizza, The Bearded Taco, Meat and Greek and a Milgi Cocktail Bar as well as many, many more.

“There are so many exciting acts around at the moment, we’ve had to add an extra evening of music this year! The festival has been growing in appeal for years, so it’s nice to be able to give more people the chance to come and experience this unique event.”

Tafwyl 2019 starts on 15 June with the Fringe Festival and follows with a jam-packed weekend festival in Cardiff Castle from Friday 21st June – Sunday 23rd June. Full line ups will be announced soon. Go to http://tafwyl.org/en/ for more information.

Star Leon’s seafront venue gets the go-ahead in Swansea