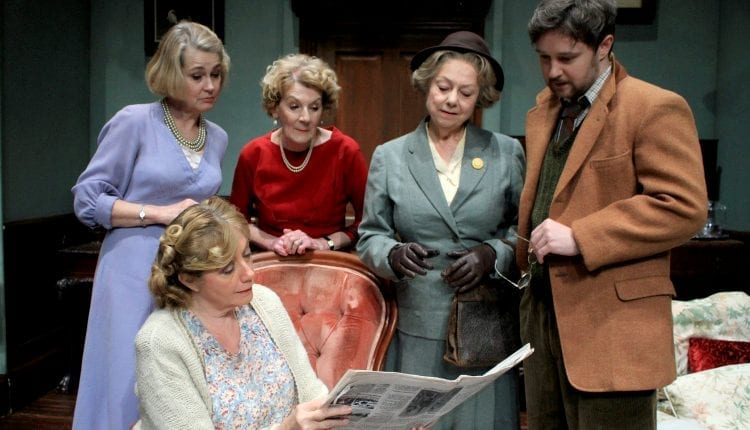 Of all the things to see at the theatre a mystery is by far my favourite. As Pam shipman famously said, “it’s just all the drama Mick, I love it”. As for this play, I did in fact love it.

This adaptation, by Leslie Darbon, of the classic Agatha Christie novel includes everything you would expect it to; twists and turns, suspense, and tragedy, with a little humour added for good measure.

The residents of Little Paddocks read in The Gazette that a murder will take place in their home at 6:30pm on Friday the 13th (bit rude to invite yourself over via the local newspaper to kill someone if you ask me but here we are).

Sure enough, neighbours arrive who were ‘just passing’ and gather at Little Paddocks and at precisely 6:30pm the lights go out and gun shots are fired.

Throughout the play we meet an array of characters including the loveable Miss Marple, confused Dora Bunner (Karen Drury), nosey neighbours, and distant family and are led to believe it easily could have been any of them who fired the shots.

With one set remaining throughout we see a range of armchairs and comfortable seating, none of which match but clearly portray Letitia Blacklock’s life and the scattered experiences of it.

As the play moves forward each of the two acts are divided into scenes between which the curtains fall and the audience erupts into frantic whispers of theories and predictions.

Someone behind me was clearly very much enjoying it, saying the revelations out loud as they occurred. The interval was one of the loudest I’ve experienced with everyone discussing who they think might have done it and sharing clues they suspect they’ve picked up on. My friend and I definitely added to this, having picked up on different things and comparing suspicions.

I found myself sat on the edge of my seat for the majority of the second half, so engrossed that I managed to block out the sounds of the woman coughing at the end of my row and the creaking of the leather jacket worn by the woman next to me.

The play closes with a number of revelations that could leave even the straightest of heads spinning, making this a very memorable one. Even as I type, I’m still wondering if I’m completely sure whodunnit did it.

I walked home, got into bed and was still thinking about it. If that’s not the sign of a good play I don’t know what is.

A Murder is Announced is showing at the New Theatre in Cardiff until Saturday 15 February 2020. For more information and to book, click here.