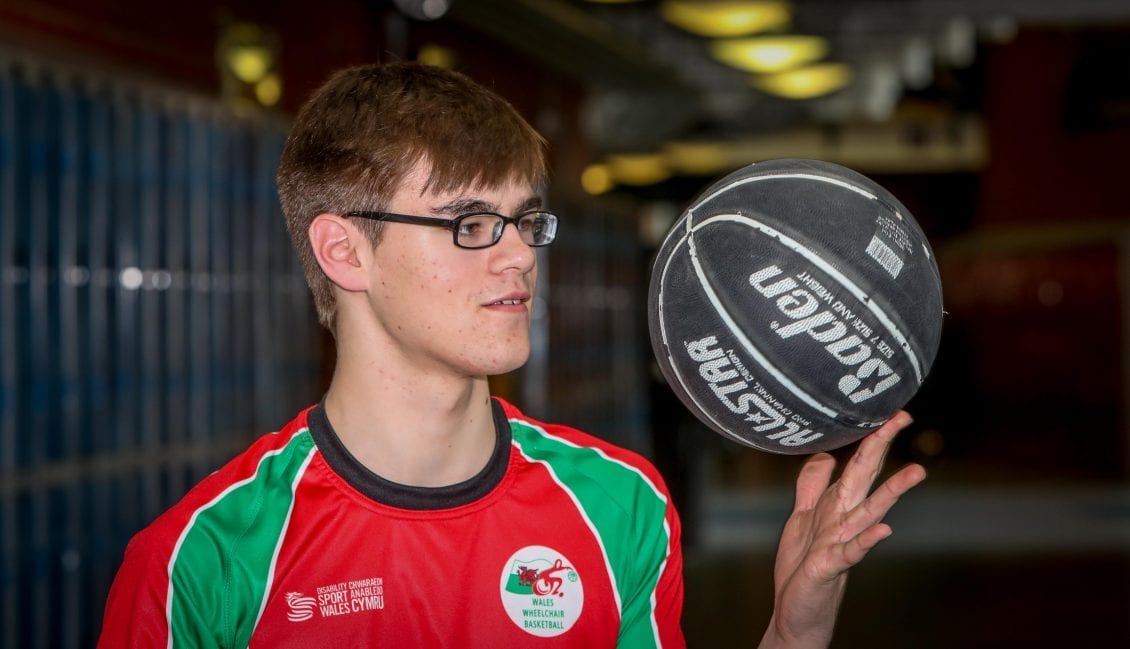 A talented young wheelchair basketball star from Deganwy has been called up for the Great Britain Under-22 squad preparing for next year’s European Championships.

Alex Wilson, 15, from Deganwy, a student at Ysgol John Bright, in Llandudno, is now training hard at regular sessions in Sheffield with the squad’s top coaches.

Alex was born with FFU Syndrome, a rare genetic disorder which affects the femur, fibula and ulna bones of the arms and legs, causing them to be of different lengths.

His condition meant that he couldn’t play sport in primary school and he has been mainly confined to a wheelchair from the age of ten but that hasn’t stopped him making a mark in wheelchair basketball.

Alex is a Welsh international at a number of age levels and has an impressive collection of medals and trophies for club and country.

He said: “Basically it has left me with one leg shorter than the other but I had lots of operations as a child to try and correct it but unfortunately one operation went wrong and left me with nerve damage.

“It means I have tremors in my legs which have got worse and although I was on crutches at first I began to get lots of back pain and my right leg couldn’t support the weight of my body.

“It meant I would collapse to the floor quite often and the physiotherapists and doctors said I should use a wheelchair – I can only walk at most about 20 metres.

The Welsh multi age group international clinched his place in the Great Britain squad with a series of impressive performances for his club, North Wales Knights.

He helped them to their first major British national wheelchair basketball title with a match-winning performance as they beat Lancaster Spinners 60-57 in the final to lift the Lords Taverners Under-18s Trophy.

The Year Ten student from Ysgol John Bright was the star, top-scoring with 24 points and with five rebounds and five assists as he was made Man of the Match.

He hopes to go on to do A-levels at the school and would like to study sports psychology at Sheffield University and as well as the European Championships Alex also has his eyes on selection for the World Championships in 2021.

Alex said: “Beating Lancaster Spinners was a historic win for North Wales, it was our first British title at Under-18s and it was streamed on the BBC sports app and is on iPlayer.

“It was funny watching it back because the commentator was going mad and screaming.”

The same weekend he stepped up into the Knights senior team and again starred with a stunning shooting performance as they overcame the fancied Warwickshire Bears in the National League Division Two Play-Off Final.

They led 27-23 at the break but a barrage of scoring from Alex and his team-mates saw them run out comfortable 65-52 winners to clinch a second trophy.

Alex began with Conwy Thunder, one of four North Wales wheelchair basketball teams, and after less than a year he was picked for the Wales squad and started training with Rhyl Raptors and making the grade with North Wales Knights.

Since then his progress has been remarkable at various age groups in the Welsh set-up, playing for Wales in major tournaments against opposition from around the UK and captaining the side.

Alex plays point guard, a key playmaking role in a five-member basketball team, or shooting guard, and has finished top-scorer in several tournaments with over 100 points.

He said: “It’s a very quick game and at national championships it can be quite physical too. It’s very high intensity but I really enjoy it.”