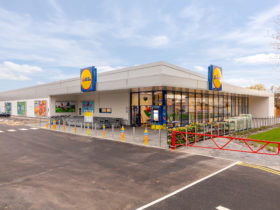 The big four-door model was announced for St Athan, some 20 miles west of Cardiff, in 2016 and over the last four years the company has been converting three massive superhangers into the company’s latest production centre at the former RAF base.

It has gradually taken on over 600 employees to make the bespoke models at a rate of up to 4,0000 cars annually and eventually is planning to have 750 jobs when additional models are added as part of the multi-million-pound investment by the car maker.

Its development as a car plant comes after the company said it is making 500 out of 2,500 redundant at its Gaydon HQ where it makes the legendary sports cars due to a collapse in orders which have dogged the entire automotive industry worldwide.

St Athan will become Aston Martin Lagonda’s production centre for the new SUV line and high performance electric cars with the flagship Lagonda likely to appear in five years time and bring the famous name back to market.

The DBX concept was shown at the Geneva Motor Show and immediately attracted buyer interest with the public unveiling of the car at the end of 2019.

There is now a 2,000 name waiting list and that’s eating up production to next spring with 80% of cars going abroad, mostly to America and China.

Today, Keith Stanton, AM’s acting chief operating officer, drove the first completed car off the production line which snakes through the hangers in a three week’s assembly journey to applause from the inspection team.

He said: “It is a real privilege to be here today to witness the completion of the first production Aston Martin DBX. I’m extremely proud of the Aston Martin team who have worked so hard to transform this ex-Ministry of Defence site into a world-class car manufacturing facility, to now be producing cars, it is testament to the resilience and fortitude of everyone at Aston Martin.”

Hosting the event was Marek Reichman, AM executive vice president and head of design, who said the DBX “is a critically important landmark for Aston Martin as we expand into the SUV sector.”

The first model off the line is destined for a German enthusiast but the flexible building technique means successive models can be signed off in any order once validated, engine tested and subjected to a high pressure water test before inspection.

Exhaustive testing has been done on 150 engineering prototypes around the world in very hot and cold climates, extremely dusty and also very dry conditions as well as off-road in forest stages used by Wales Rally GB competitors.