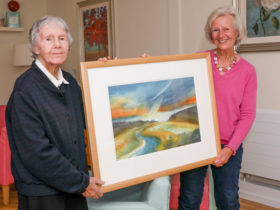 A woman from Wales who lost her mum to a deadly brain tumour is taking on a month-long swimming challenge to raise money for Brain Tumour Research.

Gill Hoare died almost 12 months after she was diagnosed with a glioblastoma (GBM) at the age of 71. After days of vomiting, a collapse at home saw her rushed to Kingston Hospital where a CT scan revealed a mass on her brain.

Throughout August, her daughter Beth Phillips, a primary school teacher from Cardiff will be taking on a 2.5k swim to help raise awareness and fund research in to brain tumours.

Beth, 40, who has two children said: “Mum was never one for getting ill or making a fuss and around six months before she was diagnosed, she had bouts of vomiting, this was unusual for Mum and we were really concerned. We convinced her to go to the doctors and she was given medication for an ear problem which seemed to work.”

However, in November 2020, when Gill, who lived in Richmond, London, began to confuse details about her grandchildren she went back to the doctors who gave her medication for a urine infection.

Beth added: “Mum would ask how my son, Griff was getting on at school but he was only 18 months at the time, it was my eldest Teddy who was actually in school.

“The medication seemed to work and Mum seemed like her usual self. We originally thought she could have Alzheimer’s.”

In March 2021, whilst at home with husband, Ken, 79, Gill collapsed and was rushed to Kingston Hospital where a CTscan revealed the shocking news of a mass on her brain.

Five months of gruelling radiotherapy and chemotherapy couldn’t contend with the aggressive and fast-growing pace of the tumour and Gill was placed on palliative care until she died in Galsworthy House nursing home in Kingston-upon-Thames on 1 March, almost a year after she was diagnosed.

Beth added: “I saw my mum for the last time in-person around mid-December due to different lockdown restrictions with me being based in Wales and my parents being based in London. We had always wondered what would come first, the end of lockdown of Mum dying  – it always felt like it was a race.

We spoke on video calls and as the months went on, Mum’s appearance became aged and vulnerable. Dad only ever got to see her through a window and for the last few months of her life we couldn’t see or hug her.

“You always think of the ‘what-ifs’ especially as a family, wondering if we should have pushed for a second opinion. Even treatment options are limited which is crazy to think how a disease such as brain tumours is so underfunded.”

Beth will swim 2.5k throughout August, at David Lloyd Cardiff with help from her two children Teddy who is six and Griff, four.

“I was keen to do something to help the cause and when I saw this challenge I thought it would be a great challenge that could include the children who were so fond of their Grandma who they now refer to as a star in the sky.”

Mel Tiley, community development manager at Brain Tumour Research, said: “We’re sorry to hear about Gill and are grateful to Beth and the family for sharing her story. It’s lovely to read that Beth and her children will take part in the challenge together. We wish Beth the best of luck in her swimming challenge and are thankful to have her alongside us as a campaigner to fund the fight against brain tumours.”