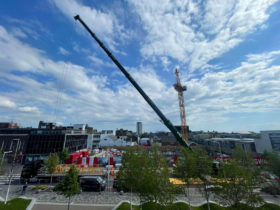 How the former Oceana nightclub site in Swansea now looks

The manager and company behind Brook Bistro in Whitchurch have been fined nearly £5,000 for failing to display a food hygiene rating at their restaurant.

The case came to light in May 2017, when complaints from the public were received that Brook Bistro, Merthyr Road, in Whitchurch was not displaying their food hygiene rating sticker showing a rating of 2, and the business was given a fixed penalty notice of £200 which they paid.

Following further complaints from the public, an Environmental Health Officer visited the restaurant on three separate occasions during the autumn of 2017 and spoke to the manager, Darren Beddis. On each occasion, there wasn’t a food hygiene rating being displayed at the entrance of his restaurant.

Mr Beddis applied for a re-grading, but this was refused on the basis that he was not displaying his current rating. Legal notices were then hand delivered to the business outlining the council’s intention to prosecute in November 2017. Mr Beddis told the officer that the food hygiene rating was being displayed. A check by the officer revealed that the sticker had been placed in the bottom left hand corner of a full length window which was being obscured by table and chairs.

The officer explained to Mr Beddis that the positioning of the rating sticker wasn’t satisfactory as the legislation clearly states that the sticker has to be put up ‘close to the entrance…where it is capable of being easily read by the customer before they enter.’

Following further correspondence, eventually Mr Beddis agreed to put up the sticker in the correct position and sent through a picture to the Shared Regulatory Service which was deemed to be satisfactory. However, following a further complaint, when the Environmental Health Officer went back to check in December 2017, the newly displayed rating sticker was being blocked by a large patio heater and couldn’t be seen.

When Mr Beddis eventually agreed to come and be interviewed about these issues he explained to the officers, that “he was protecting his business by not displaying the food hygiene rating.”

“This case shows a blatant disregard for the legislation that is in place and this isn’t the first time that the Council has had to prosecute Darren Beddis, as he has previous convictions under licensing legislation for a different business that he owned in the city.