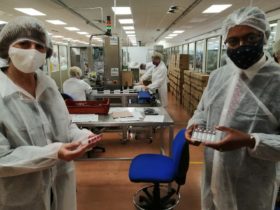 Health boards across Wales should follow ABMU’s lead by recognising the importance of digital inclusion when giving patients access to services online.

That’s according to a new independent report which looks at how the internet is an increasingly vital tool in keeping people healthy.

The efforts of Swansea Bay GP practices to help patients learn the skills needed to book appointments and request repeat prescriptions online and ABMU’s installation of free public wifi in hospitals, which was a first for Wales, have also been included as case studies.

The Digital Inclusion in Health and Care in Wales report, which was launched on Wednesday, November 7, has made a series of recommendations urging all health boards to make online services widely available.

Recommendation nine states: All health boards and trusts in Wales should follow the example of Abertawe Bro Morgannwg, signing up to the Digital Inclusion Charter and taking practical steps to implement digital inclusion support locally.

It was written by Bob Gann, who led NHS England’s digital inclusion programme, for the Wales Co-operative Centre in association with Carnegie UK Trust.

The man who led ABMU’s digital transformation strategy and who still chair’s the PKB board, former medical director Hamish Laing,, said the health board should be “very proud” of leading the way.

“The deployment of Patients Know Best in ABMU, which is referred to by Bob Gann, is going really well and it is being offered to patients in Swansea and Neath now, as well as the Princess of Wales Hospital in Bridgend, where it was piloted.

“The PKB team are doing an excellent job as ambassadors for the health board.”

The report highlights how technology allows people to become more actively involved in their own healthcare and improves health and well being. It also praises the health board for the commitments it is making to improve digital inclusion for patients and staff.

It says two further digital courses are being developed for patients in the Swansea Bay area: a Fitbit project for weight-loss patients and an initiative to combat isolation in older patients.

But despite the best practice highlighted, Mr Gann has also warned that those patients with the greatest need of access to healthcare could be left behind because of a lack of digital skills, lack of access to the internet due to cost, poor motivation and distrust of online services.

The report states that a quarter of people with limiting long-standing illness, disability or infirmity are not currently using the internet, compared with only 10% of those without such a condition. Most crucially, 25% of men and 32% of women aged 65 to 74 in Wales are not online, compared to only 3% of 16 to 49 year olds.

Cabinet Secretary for Health and Social Care Vaughan Gething said digital inclusion can improve health and wellbeing by helping people to better manage their conditions and reduce the burden on the NHS.

He has announced an extra £3m over three years to improve digital inclusion among health and care professionals and the public.

ABMU is also working with the Welsh Government’s inclusion programme Digital Communities Wales to support patients to use PKB and other online applications as well as increasing staff members’ digital skills.