South Wales students inspired to career ahead in construction

Swansea’s newest school has a striking new logo thanks to the talents of one of its students.

Charlie Bowden drew inspiration from the trees at the site of the new Maes Derw which opened earlier this year.

Maes Derw translates to Oakfield and Charlie used the fingerprints from fellow pupils to create the leaves on her tree design.

She has been presented with a framed copy of her artwork and the logo has now been incorporated into a sign at the entrance to the building.

Fellow Year 11 student Jaydn Hinder (pictured right) has also been recognised for his talents as poppy artwork he created as part of his GCSE portfolio has been selected for display in Swansea.

Headteacher Amanda Taylor said: “We are all very proud of both Charlie and Jaydn and it was nice to be able to recognise their talents before the end of term.

“This year has been a busy one as we moved into our new home and settled in but I think our pupils and their families along with our staff are really pleased with their new surroundings.”

Maes Derw has brought together services previously provided at four different sites in Swansea under one roof at the £9.64m purpose built development in Cockett.

It was jointly funded by Swansea Council and the Welsh Government under the 21st Century Schools and Colleges Programme.

The £149.5m programme is the largest ever investment in school buildings Swansea has ever seen.

Swansea Council’s Cabinet Member for Education Improvement, Learning and Skills, Robert Smith, said: “I’d like to add my congratulations to both Charlie and Jaydn who are clearly very talented young artists.

“It’s also good to hear that pupils and staff have settled in and are enjoying their new home.” 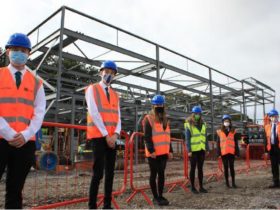