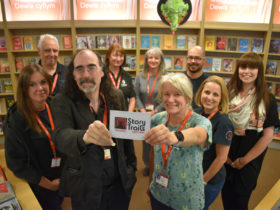 A 25-year-old from Swansea is celebrating after scooping a life-changing £100,000, when a last-minute change of plan prompted him to buy a winning National Lottery Scratchcard.

David Godfrey (25) had planned to go to bingo last Wednesday, 1 August, but when a couple of people cancelled, David and a friend decided to go for a walk on Swansea seafront instead. On a whim, David, an Operations Manager at Argos in Swansea, treated himself to a £100,000 Magenta scratchcard.

After leaving the shop, David and his friend sat on a bench overlooking Swansea Marina while he played his National Lottery Scratchcard. When he revealed the third ‘£100,000’ winning prize symbol he thought he must be dreaming and he still can’t quite believe that his win is real.

“I’ve been on cloud nine since I won. Everywhere I go, I have the biggest smile on my face, even in work!

“This win changes everything for me, it will give me a massive head start in life and I can’t really get my head around the fact that it is actually happening.”

David continued, “I’ve always wanted to own my own home but without any savings that felt like a distant dream. Now though, I can buy my dream home and more than that, I can make it exactly how I want it to be. This is the first time in my life I’ve looked forward to shopping!”

As well as putting a deposit down on a new home and kitting his new pad out, David plans to clear his debts and splash out on a trip to New York for him and his Mum.

David said: “Even though I work full-time, I’ve been living with my Mum while I try and save for a house. Now though, I can get a place of my own and treat my Mum to a holiday to say a massive ‘thank you’.”

The National Lottery changes the lives of winners like David as well as communities across the UK – players raise, on average, around £30 million for National Lottery-funded projects every week.