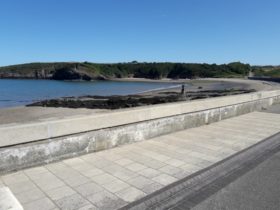 The RSPCA has raced to the aid of a horse who became caught in barbed wire in Llanelli.

Officers from the animal welfare charity were notified after a member of the public spotted the horse’s plight in fields near the A4138 at Dafen on Saturday June 20.

RSPCA inspector Nic de Celis attended, and was able to set the horse free by cutting a single strand of wire, and safely lifting the horse’s leg back over the fence.

Fortunately, the horse was very placid which had helped the animal avoid injury, and ultimately to secure a safe rescue.

RSPCA Cymru says the incident acts as a reminder as to the potential dangers barbed wire can cause to equines – and has issued a reminder on governmental guidance concerning its use.

The Welsh Government’s Code of Practice for the Welfare of Horses is clear that “barbed wire should not be used in fields used by horses”.

Inspector De Celis said: “This horse was in a very precarious situation – stood over some nasty barbed wire, and with his foot caught in wire netting too.

“The horse was clearly unhappy with the situation, but thankfully remained calm.

“Fortunately, I was able to free the horse and lift the leg over the fence by cutting a single strand of wire. The horse was unhurt, and could be released immediately.

“Barbed wire can be so dangerous for equines – and that’s why the Welsh Government Code of Practice is clear that it shouldn’t be used in fields where horses are present. This incident is another reminder as to why.

“This could have been a far more complex rescue, with the horse at risk of serious injury. Thankfully, the animal was so calm and placid that it was safe and easy for me to help.

“Our officers remain on the frontline during the Covid-19 crisis – responding to emergencies, like this horse. If you want to help us to help them, you can support the RSPCA online.”