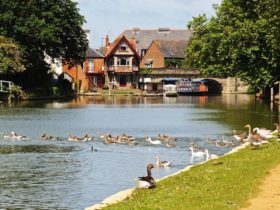 Oxford vs Cambridge: The Ongoing Rivalry

Georgi, who won her national title at Lincoln in October, finished eighth overall on her debut in the Women’s Tour last year and went close to winning stage two in Walsall with a late attack.

Stage four of the race is from Wrexham to Welshpool on Thursday, June 9, with stage five from Pembrey Country Park to Black Mountain Friday, June 10.

Spectators can watch all the action by the roadside for free and highlights of the race will be shown on ITV4 in the UK, and around the world via Eurosport and GCN.

Stage four starts from the heart of Wrexham before entering Powys at Rhydycroesau. The 148-kilometre route will take in Llansilin and Penybontfawr before an unforgettable, anti-clockwise loop of Lake Vyrnwy near Llanwddyn.

It then winds its way towards the finish line in Broad Street, Welshpool, via Llanfihangel, Dolanog, Castle Caereinion, Berriew, Montgomery, Forden and Leighton.

Stage five will see riders roll out from sea level at Pembrey Country Park before heading north to Llandovery via Pontyberem, Nantgaredig and Brechfa. The stage features 2,065m of elevation gain, the most of any stage in this year’s race, finishing atop Black Mountain in the Brecon Beacons National Park.

Previous British road race champion Jess Roberts (Team Coop – Hitec Products) will also be on the start line at the Colchester Sports Park for stage one.

For Roberts, the 2018 British champion, starting this year’s event will mark her debut in the six-day race. Stage five, which runs between Pembrey Country Park and the Black Mountain, will take place entirely in her native Carmarthenshire.

Roberts said: “I’m particularly excited for stage five, which goes along my home training roads. It will be really special to race on them, and my family will be able to watch too! It’s definitely going be a tough stage, that’s for sure!”

Roberts’ Team Coop – Hitec Products team-mate Josie Nelson also returns to the race next month. Runner-up to Georgi in last year’s British championships, Nelson finished in the top 15 of all but one stage of the 2021 Women’s Tour on her debut aged just 19.

Archibald has recorded three top-10 stages finishes during her four previous participations, including fifth in London on the final day of the 2017 race.

The race ends in Oxfordshire on Saturday, June 11 with a stage between picturesque Chipping Norton in the Cotswolds and the heart of historic Oxford.