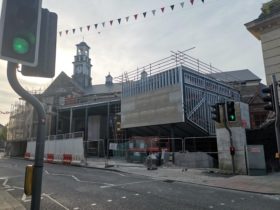 Newport has officially accepted the British Transplant Games flag as this year’s event in Birmingham draws to a close.

Following the four-day event which has been hailed the biggest yet, representatives from Transplant Sport and the Birmingham Games officially handed over to Newport at a celebration event at the city’s International Conference Centre.

Councillor Malcolm Linton, Mayor of Newport and Ann Lloyd CBE, Chair of Aneurin Bevan University Health Board and Chair of Newport’s Local Organising Committee for the Games, praised those who were involved and took part in Birmingham and made a clear commitment to match if not exceed the success of this year’s event.

Guests also saw a video where Leader of Newport City Council, Councillor Debbie Wilcox presented highlights of the city and Newport’s track record for hosting world-class events. She also spoke of the honour of hosting such a special event and how inspirational the athletes, families and volunteers involved in the Games are.

Next year’s event is expected to attract more than 850 transplant recipient athletes and more than 1,500 supporters, including donor families, to the city in the summer of 2019.

Organised on behalf of the charity Transplant Sport UK, the aim of the Games is to raise awareness of and increase organ donation. Title sponsor Westfield Health, a leading not-for-profit health insurer, has been involved in the Games for more than a decade.

Westfield Health British Transplant Games include over 25 sporting and social events and competitions for all abilities, from fishing through to track and field, including the Donor Run, an inclusive event open to the public. There will also be some new events specially hosted by Newport.

Although Wales has already introduced ‘deemed consent’ for organ donation, there is still a considerable need to positively promote the benefits of organ donation, how essential it is to discuss wishes with loved ones, plus raise the general awareness of the need for transplant recipients to lead active and healthy lives to increase transplant life expectancy.

The Games have never been to Newport, and it is hoped that a legacy of the event will be to encourage greater numbers of Welsh transplant patients to join the Games family, and experience the social integration of the Games.

“We are honoured to have been selected to host this prestigious event. Newport has an excellent record of hosting sporting events from the Ryder Cup, Velothon, track cycling championships to Olympic and Paralympic training camps – but this event will be something special for the city.

“These athletes are inspirational and the Games bring with it such an important message. Wales has led the way in the UK in its approach to organ donation, but there is much more to do to raise awareness of its importance and encourage commitment across the country.

“We hope as a city we can not only deliver spectacular Games but do justice to this worthy cause.”

Newport Council, Newport Live, Welsh Government and the Games organisers will work in partnership to make this the best event yet.