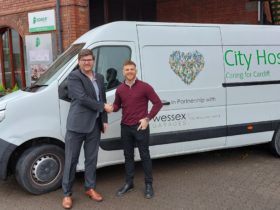 Space2B names City Hospice as Charity of the Year

A man from Buckley, Flintshire, will cycle from Land’s End to John O’Groats, this week from 27 July – 08 August, to raise money for charity Parkinson’s UK.

54-year old, David Knight, is participating in the cycling event in memory of his late father-in-law, Derrick Harding, who had Parkinson’s.

Parkinson’s is a progressive neurological condition for which there is currently no cure, and it affects around 148,000 people in the UK, including 121,927 in England.

“I am taking on this challenge in memory of my father-in-law who had Parkinson’s. He was a very outgoing person prior to Parkinson’s and the condition had a big impact on him. My main focus is around raising awareness of Parkinson’s as well as raising funds. Lands End to John O’Groats has been a long-term ambition. In the past I have struggled to find the time to commit to all the training to allow me to do this successfully. I am really looking forward to taking in the scenery across the country and meeting new people on this journey.”

Parkinson’s UK estimate that there are more than 40 symptoms of the condition. As well as the most widely known symptom – tremor – these range from physical symptoms like muscle stiffness to depression, anxiety, hallucinations, memory problems and dementia, but Parkinson’s affects everyone differently. The charity aims to find a cure and improve life for everyone affected by Parkinson’s through pioneering research, information, support and campaigning.
Ann Rowe, Head of Regional Fundraising at Parkinson’s UK, said:
“We’re delighted and grateful that David has chosen to support Parkinson’s UK by taking on the incredible challenge of cycling from Land’s End to John O’Groats.

“Our work supporting people with Parkinson’s, and research to find better treatments and a cure for the condition is completely dependent on donations.

“To put it simply, without the support of our amazing fundraisers, the work we do just wouldn’t be possible. We wish David the very best of luck for the challenge.”