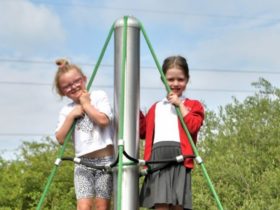 A prestigious Master Rearcrew Certificate has been presented to Kevin Weller, Chief Technical Crew at HM Coastguard Search and Rescue (SAR) base, Caernarfon, to recognise his contribution to rotary aviation.

The award was presented by the Honourable Company of Air Pilots at a black-tie dinner at The Guildhall in London last night (21 Oct).  The award recognises long service and consistently high standards in one or more branches of professional flying whether civil or military, including air transport, airborne instruction, test, or operational flying.

Mr Weller, played a key role in the transition of the HM Coastguard SAR helicopter service to Bristow in 2015, helping to ensure the safe introduction of Sikorksy S-92 helicopters to North Wales, and managing the transition of a large number of aircrew from the military.

He served with the Royal Navy from May 1973 where he qualified as an aircrewman on Wasp helicopters and before receiving his instructor qualification. In the years following the Royal Navy, he began teaching future generations of UK and overseas aircrew at the SAR Training Unit at RAF Valley.

Having amassed over 7,000 flying hours in military aviation, Mr Weller was back on the front line as he joined Bristow in 2014, as the business prepared to begin delivering the HM Coastguard SAR helicopter service for the Maritime and Coastguard Agency of the UK Government.

Mr Weller said: “I’m honoured to receive the Master Rearcrew Certificate. Being part of the SAR service through my military career into my tenure with Bristow has been hugely rewarding. From taking part in countless rescues to instructing future generations at the SAR training unit, I am incredibly proud to be part of the team.”

Capt. David Kenyon, Chief Pilot at Caernarfon said: “Having known Kevin for almost 20 years, I have experienced first-hand what an outstanding aviator, manager and instructor he is and his passion to inspire those following in his footsteps.

“His steadfast support to the development, training and conduct of SAR helicopter operations across the military and civilian sectors marks him out as a worthy recipient of the Master Rearcrew Certificate. He has performed numerous challenging rescues, continuing to operate at the highest level of capability that HM Coastguard is renowned for, and I am exceptionally proud to call him a colleague and friend.”