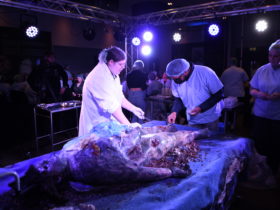 Post-Mortem Live is coming to Cardiff

The end of April 2019 marked an important milestone for Wales’ national airport in terms of passenger growth. Over the last 12 months, more than 1.6 million passengers have flown through Cardiff Airport, reflecting an increase of 7% versus 2018. This is the busiest year since 2009.

Passenger growth for the month of April was up 20% versus the same month last year, with Cardiff Airport welcoming 126,399 total passengers, reflecting the Airport’s position as not only a point of departure, but also as a key international gateway for visitors to the UK.

Passenger numbers at Cardiff Airport have grown by over 60% since Welsh Government purchased the Airport in 2013.

Growth in April was due to a number of factors:

April’s most popular destinations included Alicante, Tenerife, Edinburgh, Malaga, Palma and Belfast, as well as hubs such Amsterdam, Doha, Paris and Dublin which offer passengers the ability to connect to worldwide destinations.

Deb Barber, CEO at Cardiff Airport said “We are delighted to have reached this passenger milestone after what has been a transformational 12 months, and our busiest period in over 10 years.

“April’s figures show another strong month of passenger growth, with passengers jetting off to destinations across the world, and our airline partners reacting to increased customer demand by adding new routes and extra capacity.

“2019 is set to be another exciting year and we look forward to a busy summer season.”

Cardiff Airport continues to make improvements to the terminal and the customer experience by recently launching new e-passport gates, an improved security search area and a re-configuration of the car parks, including a park and ride service from the newly opened off-site car parks.