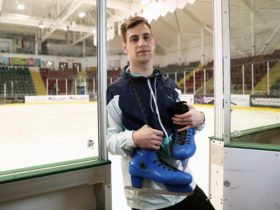 Arriving like a thin ribbon of sunshine cutting through an ash-grey sky, Wylderness’ latest offering “Wet Look” blends doomy shoegaze sensibilities with brighter, more rhythmic moments that echo the pull of the coming summer months.
Changing tack from the punk-infused earlier single “Centre of Gravity” —  the band’s first in almost four years — the mesmerising new cut nods to the likes of DIIV and Sonic Youth, but adds a woozy and infectious Wylderness spin.
Fuzzy and lo-fi feeling at times, but polished and pop-tinted at others, the band explain of the new track:

“We found these old books by Japanese author Yasunari Kawabata at a second hand furniture and nick nack store in Cardiff. Pretentiously, the books ended up inspiring a few of the songs on our new album and this one in particular.
It’s about what it means to get some connection back with nature when we’ve become estranged from it. The title draws inspiration from 90s hair gel, the almost inevitable result of encountering rainfall when climbing a mountain in Wales — and embracing it.”

Recorded at Giant Wafer Studios on a farm in rural mid-Wales and with vocals and overdubs added at Andy Ramsay (Stereolab)’s Press Play Studio in London, the track seeks to embody this contrast between the buzz of the city and the stillness found in nature.
Recorded and produced by Rory Attwell, the band add:
“Musically it’s inspired by the early Real Estate albums. It’s the first song we wrote for the new album — it talks about solitude and isolation but the lyrics were written before the pandemic!”
Alongside earlier single “Centre of Gravity” — a curveball track with stabbing punk sensibilities and a frantic undercurrent of fuzzy reverb — “Wet Look” comes as another glimpse into Wylderness’ confirmed second album ‘Big Plans for a Blue World’ produced by Rory Atwell and due 15 July 2022, via Succulent Recordings. Recorded between Andy Ramsay of Stereolab’s London studio and a farm in rural Wales, the release sees Wylderness build upon the foundations of their eponymous 2018 debut with an expanded lineup and a more complex approach to instrumentation, with the addition of vintage synths and clarinet.
With its title inspired by a fictional David Bowie song and a bizarre dream, vocalist and guitarist Marz says of ‘Big Plans for a Blue World’:
“I had a vivid dream that I was at a David Bowie concert in the mid 80s. Bowie walked on stage in a crisp blue suit and said: ‘this is a new song, it’s called “Big Plans for a Blue World”.’ The song was in the same vein as ‘Sledgehammer’ by Peter Gabriel — probably not up there with Bowie’s greatest work but it had a catchy chorus. I woke up and wrote it down, and started Googling to see if it was a real song by Bowie but nothing came up. We took it that this was meant to be the name for our new album.”
Combining dark and dreamy pop influences with stratified synths and barbed instrumentals, ‘Big Plans for a Blue World’ echoes the shoegaze garble of DIIV, Ride and Yo La Tengo, with a hint of Sonic Youth. From the lengthy Kurt Vile-inspired “Keep on Keeping” to the wonky and experimental instrumental “Warped” and the jagged spoken-word track “YLT vs VU” Wylderness wear their influences on their sleeves as they wade through a melee of inspirations including second-hand Japanese books, Jack Nicholson films and real-life run-ins with drunk fans and unsettling earthquakes.
Finally set to arrive this Summer, the long-anticipated record comes as the band’s first in almost four years, and is a punchy and perspicacious follow-up to the band’s self-titled debut. Full of incisive guitar lines and misty dream-pop melodies, 2018’s ‘Wylderness’ amassed praise from the likes of CLASH, DIY and Drowned in Sound. The record was also championed by Steve Lamacq (BBC 6 Music) and Huw Stephens (BBC Radio 1), and was included in Radio 1’s Best of BBC Music Introducing.
Following the release of the album this Summer, Wylderness will be playing a hometown album launch show at Cardiff’s Clwb Ifor Bach on Friday 29th July.  Alongside the new album, Wylderness will also be selling their brand new coffee at the show – ‘Big Plans for a Brew World’ – a collaboration with local coffee company Hard Lines.
With tickets on sale now from just £6.00, the band will be joined by Welsh rock piece The Vega Bodegas (who feature who feature Jimmy Watkins (ex-Future of the Left / the ‘running punks’ album reviews on YouTube)).
Book your tickets for the Wylderness gig this Friday here.
0 Shares
Share on Facebook Share on Twitter Share on WhatsApp Share on WhatsApp Share on Linkedin Share on Email
Rhys Gregory July 28, 2022