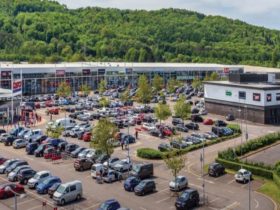 B&M to replace former Marks and Spencer store in Cardiff

The campaign to mark the achievements of Cardiff Bay’s Rugby Codebreakers has attracted public support from The Speaker of the House of Commons, Rt Hon Sir Lindsay Hoyle MP.

Under the banner ‘One Team. One Race: Honouring the Cardiff Bay Rugby Codebreakers’ the campaign aims to immortalise some of the country’s greatest sporting heroes in a permanent artwork designed to ensure their stories – and the story of the proud and vibrant multi-cultural community which helped shape them – are never forgotten.

In a letter to Stephen Doughty, MP for Cardiff South and Penarth, Sir Hoyle wrote: “I am delighted to write in support of the campaign to recognise the Welsh rugby heroes who switched codes from rugby union to rugby league.”

A panel of experts narrowed down those to be recognised to a list of 13, the number of players in a Rugby League team. They all grew up within a three-mile radius of Cardiff Bay.

Sir Hoyle added: “It is truly amazing that the Cardiff Bay area produced so many talented sportsmen who, thanks to their inspired decision to switch codes, achieved every honour imaginable in the 13-a-side sport. The rugby league community has quite rightly immortalised many of the players such as Clive Sullivan, Billy Boston, Colin Dixon, Roy Francis, Jim Sullivan and Johnny Freeman to name but a few. In the case of Clive Sullivan, not only did he achieve significant domestic success but, more importantly, he was the first black player to captain any British sporting team, scoring a memorable length of the filed try to help Great Britain win the 1972 World Cup! This story is truly the stuff of legend in British sport. However, at the time, outside of rugby league circles, this went largely unrecognised.

“I fully support the campaign to grant recognition to the codebreakers in the form of a statue. I am sure the campaign will receive huge amounts of support, not just in the south of Wales but across the UK and ensure that the sporting greats from this very special area are given the recognition they deserve.”