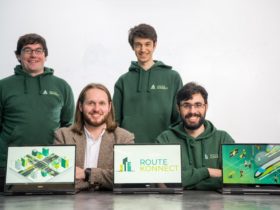 Cardiff Metropolitan University has pledged £400,000 to support the role of education in peace-building in Ukraine.

Speaking at today’s ‘Cardiff Met Supporting Ukraine’ event on the University’s Llandaff campus, Professor Cara Aitchison, Cardiff Met’s Vice-Chancellor, pledged a range of support, including £400,000 over the next two years in Fellowships and Scholarships, as well as accommodation for those fleeing Ukraine.

Working with the Council for At-Risk Academics (CARA) and Universities of Sanctuary, the money will fund CARA Fellowships and Cardiff Met Sanctuary Studentships for academics, students and sports people displaced by the war in Ukraine.

Cardiff Met is a global community attended by students from 140 countries, including Ukraine and Russia. It is also a designated University of Sanctuary with a values-driven culture, as reflected in it being awarded the title of Times Higher Education University of the Year 2021 for UK and Ireland.

The University’s students, staff and partners have voiced their shock and anger over the unfolding events in Ukraine since the invasion began, expressing solidarity with Ukraine’s people in condemning the war and in recognising its sovereignty, independence and national borders.

Cardiff Met has been working in partnership with researchers at Lviv National Academy of Art in Ukraine, engaging in the Creative Spark collaborative research project funded by the British Council. Academics at Lviv are currently supporting their displaced partners from Kharkiv Academy of Art in eastern Ukraine following destruction in the latter city, with Cardiff Met pledging support for both institutions.

Addressing students, staff and partners at the Cardiff Met Supporting Ukraine event, Professor Cara Aitchison said: “Ukraine is a country with a rich cultural heritage now under threat and we have seen art schools, sports facilities, cultural heritage and digital infrastructure destroyed by the war.

“We offer solidarity with our partners at Lviv National Academy of Art in Ukraine and we are committed to working closely with the Council for At-Risk Academics to offer appropriate sanctuary and support for Ukrainian academics and students at this extremely testing time.

“As educators at Cardiff Met, we are committed to playing our part as a designated University of Sanctuary and we are working closely with the UK Universities of Sanctuary Steering Group, Welsh Government, the Wales Centre for International Affairs and Academi Heddwch to ensure our university responds with appropriate support.”

Professor Aitchison highlighted Cardiff Met’s first postgraduate Sanctuary Scholar, who came from Donetsk in Eastern Ukraine after the 2014 Russian invasion and who recently graduated with a Masters in Teaching English to Speakers of Other Languages, and is now teaching refugees in South Wales. Professor Aitchison also referenced the work the University has undertaken this year to welcome two doctoral level Fellows from Afghanistan, supported by the Council of At-Risk Academics (CARA) which works with universities to identify and offer support for academics and students threatened and/or displaced by conflict.

The focus on art for peace, together with Cardiff Met’s long-standing tradition for using its sporting reputation for international diplomacy, will underpin the package of support designed to offer sanctuary for academics and students in art, sport and digital culture who have been displaced by the war.

As well as the £400,000 package of Fellowships and Scholarships, Cardiff Met has also pledged accommodation for those fleeing Ukraine.

In addition, the university is working with the Purpose Coalition to support a new initiative called ‘Jobs for Ukraine’ supporting those displaced by the war.

Cardiff Met will shortly be advertising 50 new academic posts and these will be brought to the attention of universities in Ukraine where academics may no longer be able to continue working.

A fund will be established by the University for those wishing to contribute to the Fellowships, Scholarships or wider initiatives relating to supporting academics and students from Ukraine. Full details of how to donate will be released in due course.