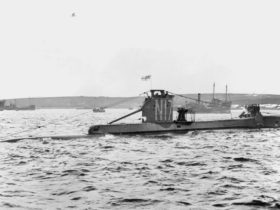 HMS Urge to be remembered at Bridgend County Borough ceremony

A big hearted care organisation has come to the rescue after the £400 in donations from an orchestra’s 10th anniversary concert in a church was stolen.

Bosses at Pendine Park were so horrified by the shocking theft at St Giles’ Parish Church in Wrexham that they have reimbursed the Wrexham and St Asaph based NEW Sinfonia for the full amount.

The cash box was stolen by the brazen thief who struck despite several people being there at the time, including brothers Robert and Jonathan Guy who founded the orchestra to provide a platform for the talents of up and coming musicians.

The money was donated via the Pendine Arts and Community Trust (PACT), which more than 30 supports arts and community-based activities across Wales.

The trust also gave a further £250 to St Giles’ Parish Church towards its community work.

The brothers, who hail from Wrexham, told how they were “aghast and deeply saddened” on discovering the cashbox was missing.

NEW Sinfonia conductor Rob explained: “We were packing up our things to leave the church and placed a few items on a table top. Both Jon and I and our parents were all within a few feet of the table all the time.

“I went to go and bring our car round to pack our things into and when I returned I was stunned to hear that the cashbox had gone missing. The thief must have struck like lightning. We did not even know there was anyone else in the church. “

Later viewing of CCTV footage in the church revealed the presence of a previously unseen dark clothed stranger. As heads were turned for a few seconds he quickly crept up to the table, snatched the box and then huddled down low to the floor to crawl to the church exit.

Accomplished composer and clarinetist Jonathan said: “It was so heart-wrenching to think someone could do that. This was money which was received on the night for last minute entry and donations. A number of people kind heartedly gave more than our ticket asking price.

“To think it was so flagrantly taken while we were in the room is deeply saddening, not just for the orchestra but it sullies the good reputation of the church as well.”

Police are now investigating the theft.

NEW Sinfonia is the resident orchestra of the North Wales International Music Festival in St Asaph which is also supported by PACT.

The orchestra also has a long association with St Giles’ Parish Church, which was one of the concert venues for the orchestra’s 10th anniversary concert series, entitled Ten4Ten.

It also marked NEW Sinfonia becoming a registered charity after drawing up an ambitious blueprint of community events and workshops to spread the joy of music further.

The night of the cashbox theft saw them perform with the Chester DeeSign choir at a concert titled ‘Angels Sign and Sing’, so called because it coincided with the current Festival of Angels which has been delighting visitors to St Giles.

The entire interior of the church is festooned with 6,000 handmade decorative angels in a host of different designs.

The festival was conceived to commemorate the 6,000-plus victims of Covid-19 in Wales and to offer a sign of hope to the community and nation.

Inspired by the 15th century musical angels on the church roof, each of the model angels is handcrafted, often from recycled materials. Hanging from the ceiling and adorned to the walls and public entranceways, they make for an enchanting sight.

The Rev Dr Jason Bray, vicar of St Giles, said the festival had touched many hearts and provoked magnificent feedback from the local community.

He said: “Many spirits have been lifted by what has been achieved here with the festival and the Angels Sign and Sing concert which created such a wonderful feelgood factor.

“It is hard to think that amidst all that positivity such a contemptible act could have taken place. It is not just the financial loss which is so upsetting but the violation of the sanctity of the church.”

The Rev Dr Bray thanked Pendine Park and other community members who had supported the church and NEW Sinfonia in the wake of the theft.

He said: “I want to thank Pendine Park for their enormous generosity. This money will be a big help with the outreach work which we do around Wrexham, particularly helping less fortunate members of our community.”

Robert, who is director of the University of Manchester’s elite undergraduate conducting programme, Head of Choral Programmes and Director of Ensembles, said: “We have been astounded by people’s extraordinary benevolence.

“Following on from the theft being reported to the police, the news about it spread, and we have since received many messages of support, along with a number of donations.

“We are so grateful and encouraged to think people have gone out of their way to help us. We offer a huge thank you to our ‘guardian angels’ at Pendine Park and everyone who has contributed.”

Pendine’s Artist in Residence, Sarah Edwards, met with Robert, Jonathan and Dr Bray at the church on behalf of the award-winning care group, which has eight residential homes in Wrexham and at Caernarfon.

She said: “Pendine Park strives to support a number of local organisations and champions the good work achieved by community groups.

“We have past links with NEW Sinfonia and are very aware of their efforts to nurture up and coming young musicians in Wales.

“They have also brought a great deal of pleasure to people within the Pendine community where the arts provide a golden thread that runs through daily life here to enrich the lives of our residents and our staff.

“When our managers heard about what had happened they had no hesitation in stepping up to reimburse the loss.”