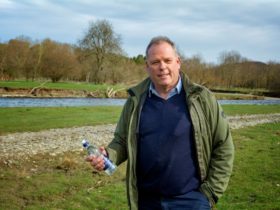 Radnor makes Anti-Bullying Alliance its Charity of the Year

A student nurse and care worker has completed a half marathon with her two pet dogs running alongside her in aid of the hospice which cared for her mum in the final days of her life.

Maddie Evans, 37, set herself the goal of conquering the 13-mile feat to raise money for St David’s Hospice in Llandudno which lovingly nursed her mother Lorraine through the end stages of a heartbreaking battle with cancer of the oesophagus.

Accompanied every step of the way by her four-year-old Jack Russell called Bella and her two-year-old Bedlington terrier, Bobby, she raised £400 from the challenge and has now received a treasured thank-you certificate from the hospice.

Maddie, who works part time at Pendine Park’s Bryn Seiont Care Home in Caernarfon,  had intended to tackle the half marathon in memory of her beloved mum on what would have been her birthday. But with icy gales and snow on the horizon for that date, she decided to do the challenge a few days earlier than originally planned.

She said: “It was strange. I went for a training run, taking the dogs along as usual, and it was such a lovely bright sunny morning when I got out that I felt a surge of energy as if something was egging me on. Completely on a whim I thought to myself ‘do you know what, I’m going to do it now, today.’ So I just went for it.”

Bryn Seiont manager Sandra Evans said: “She has always been a natural carer, so good with residents and a great role model to fellow staff here at Bryn Seiont Newydd. To have raised a good amount and simply to have determined to achieve her goal in what has been a bleak winter weather-wise and with all the distractions of the pandemic is a real credit to her. We all congratulate her from the bottom of our hearts.”

Mum of two Maddie rang her family to tell them of her impulsive decision just after she started the challenge. More than two hours later she was delighted to see them smiling and cheering her on as she arrived at the end point.

She is rightly proud to have completed the distance in a commendable two hours, 19 minutes.

Though she had been building up her pace and distance over many weeks of training sessions, this was the first time Maddie had ever run the complete half marathon.

She said: “I’ve got to be honest, those last two miles were really tough. My legs were aching and I was feeling fatigued by then, but I was determined to carry on. Then when I looked up ahead of me and could just make out that the kids had come out to greet me at the finishing post it gave me exactly the impetus I needed to carry on.”

She admitted both she and the dogs had a deserved rest the following day.

Maddie, who lives in Bontnewydd, near Caernarfon, took the dogs along as she said her mum was such a keen animal lover and would have adored the fact that her pets completed the challenge alongside her.

Had she lived it would have been Lorraine’s birthday on January 16, but she died 13 years ago, aged just 51, six months after her diagnosis.

Maddie said it seemed an apt tribute to run 13 miles – a mile for each of those 13 years. She started training last year and followed a route along a cycle track from Bontnewydd to a finishing point just beyond Penygroes.

In between training runs Maddie managed to complete a crucial final year dissertation for her nursing studies, as well as heading up the family home and holding down her part time job as a care assistant at Pendine Park’s Bryn Seiont Newydd.

Now approaching the end of her nursing training through Bangor University, she is currently back on a student work placement in the intensive care unit at Ysbyty Glan Clwyd, Bangor.

Maddie said she originally took up running as a way to calm her mind and use up excess adrenaline following a previous student placement working on the hospital’s cancer ward.

She said: “It was enjoyable, but also particularly poignant considering mum died so young of cancer. Nurses have to be tough to get through the emotional and physical strains of the job and it means they build up a lot of adrenaline. I found running was the perfect release for that.”

She is taking a break from running for now to focus on completing the final stages of her training but she hopes to one day take on another similar challenge.

According to Maddie, it was working at Bryn Seiont that inspired her to train as a nurse.

She did her final year dissertation on dementia care drawing from her experiences of working with the residents.