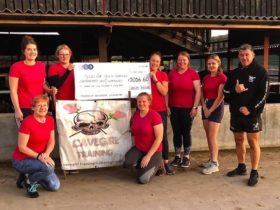 A woman who became a virtual prisoner in her own home because of mental health issues has battled back and won a good neighbour award.

Community stalwart Sheila Campbell, 60, from Trinity Avenue in Llandudno, was honoured at a housing association’s special day celebrating the lives of older people.

More than 200 tenants of Cartrefi Conwy from across the county attended the Older Person’s Day at Venue Cymru in Llandudno.

The gala event gave them the chance to meet and mingle with people of a similar age from some of the association’s 3,800 properties.

The highlight of the day was a glittering Oscars-style awards ceremony in which tenants were honoured for their voluntary work in the community.

The nomination described her as a good listener and a truly outstanding neighbour.

According to Sheila, she was “gobsmacked” after she was called to the stage to collect the award from Aberconwy AM Janet Finch-Saunders and Bill Hunt, the Cartrefi Conwy tenant board member who is also chair of the association’s Tenant Services Board.

She said: ‘My husband Wally and I have lived at Trinity Avenue for eight years now. We were previously in private accommodation in Rhos-on-Sea. To win this award is just fantastic and I never expected anything.

“I had mental health issues and a nervous breakdown six years ago. I was really struggling. I couldn’t go out as I’d have panic attacks. But my mental health nurse suggested just going into the communal garden. That’s what I did.

“That got me talking to a lot of neighbours and other tenants. I just like helping when I can and Wally helps out with TV issues.

“But my biggest thing is the garden and keeping it nice. We have one tenant who is very ill and can’t really get out. But his daughter tells me he just loves looking at the garden; he gets so much pleasure from it.

“That makes it all worthwhile. I really was gobsmacked when my name was called out. I’ve never won anything like this before. I’m so grateful to the neighbours who nominated me.”

Husband Wally was thrilled his wife has been recognised for her community spirit.

He said: “We absolutely love living in Trinity Avenue. It doesn’t look anything like you’d expect a housing association estate to look like.

“If you need a repair there is no waiting it’s dealt with. The accommodation is just wonderful and we feel safe, secure and warm. We can’t ask for anything else.”

Sheila shared the Outstanding Neighbour Award with “kind and thoughtful” pensioner Richard Blackwell, 78, from the Parkways estate in Rhos-on-Sea.

He helps poorly neighbours tend their gardens and walks their dogs when they can’t.

A delighted Richard said: ‘I can’t believe it. I love it where I live and have such good neighbours. I like to think we all help each other. I don’t think I’m any different to anyone else to be honest.

“I’m very pleased though and my award will take pride of place on my mantlepiece. I’ve no intention of ever leaving Parkway; we really do have a great community.”

As well as being provided with lunch, the tenants enjoyed a bingo session and entertainment from bands the Rock and Roll Kings and The Quaynotes.

There were also information stands and raffle which raised more than £615 for St David’s Hospice which cares for people across Conwy, Gwynedd and Anglesey.

Nerys said: “We have enjoyed a wonderful day and I’m so proud of all our tenants. We have a record number of tenants attending this year’s event and everyone has had a great time.

“The whole day is about celebrating older tenants and all they do within our communities and for Cartrefi Conwy. Our motto is building communities to be proud of and they certainly do that.

“My main focus is on preventing loneliness and isolation. Loneliness can have the same damaging effect on someone as smoking 15 cigarettes a day.

“As an organisation we have just signed a pledge to remove the stigma that too often comes with mental health issues. And it’s important tenants get the opportunity to work with us in combating some of these issues.”

She said: “Cartrefi Conwy goes further than any other housing association in trying to assist every generation.

“I have been really touched by stories I have heard of how tenants have worked with Cartrefi Conwy to improve mental health issues.

Cartrefi Conwy Chief Executive Andrew Bowden said: “The day is about celebrating our older tenants and having a lot of fun. However, there is an underlying business purpose and it’s an opportunity to give our tenants lots of information and signpost them towards people and organisations that can and will help them.

“This is what good customer service is all about and Nerys Veldhuizen and her whole team have done a fantastic job in putting this day together.”

Managing Director Gwynne Jones says he is proud of the work done throughout the year by staff of the registered social landlord and the contribution tenants make to the housing association’s success.

He said: “This is a very special day and it’s important we give our older tenants the red carpet treatment and recognise their contribution in our success story. They are all, each and every one of them VIP’s for the day.

Llanrwst Cartrefi Conwy tenant Tilly Goodwin won the Outstanding Volunteer Award for her work as chair of the community’s Alltogether Group and for the work she does in arranging Macmillan fundraising events.

The award for Outstanding Communal Garden went to Cysgod y Gogarth in Llandudno and Outstanding Individual Garden award was won by Mr and Mrs Lloyd of Maes Aled, Cerrigydrudion.