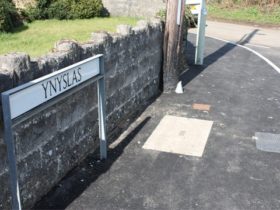 Review of unadopted streets underway after successful pilot in Bridgend

A team of 4×4 volunteers who helped snowbound NHS staff at the beginning of the year are expanding their service across North Wales thanks to a cash boost from a police charity.

The voluntary organisation assists police, emergency planners and other blue light responders by offering their 4×4 vehicles in a crisis.

Volunteers from the 4×4 Response Wales recently supported North Wales Police during the Bangor-on-Dee flood emergency in January – assisting 40 people to safety – and have also been ferrying emergency food supplies to vulnerable people during the pandemic.

They also covered more than 2,000 miles while driving 52 NHS workers from Betsi Cadwaladr University Health Board (BCUHB) through snowy weather at the start of the year so they could get to work safely when their own vehicles could not cope with the conditions.

The charity is one of more than 2,500 projects supported by PACT who have invested more than £1.6 million in grassroots community projects designed to combat crime and build “resilient communities” – often funded by cash seized from criminals.

An independent impact study recently conducted by Wrexham Glyndŵr University has revealed the huge benefits PACT-funded projects have brought to safety and community relationships over the past two decades, with as much as 96% reporting positive life changes for the people they support.

The research, jointly-funded by PACT and Wrexham Glyndŵr University, provides a detailed insight into how the charity is helping to transform lives, supporting people to change their behaviour and bringing communities together.

North Wales-based responders for 4×4 Response Wales successfully applied for funding to secure a mobile router system that will protect against poor 3G/4G data signals and ensure a WIFI network is available at Forward Control Point locations wherever responders are deployed – even in the most remote areas.

The grant will also part-fund the cost of Defra 1 flood awareness training for up to 15 responders and other health and safety equipment necessary to assist with the safe access and egress for casualties and evacuees in times of flooding and other emergencies.

Vernon Turnbull, 4×4 Response Wales’ Planning Officer for Wales, said: “We have 50 members of which around 35 are active. Without the PACT funding, each member would have to put their own hand in their pocket to buy the kit we need. That probably wouldn’t happen as they already have to pay towards their own vehicles, on-board equipment, training and diesel.

“We are so very grateful, especially to North Wales Police who thought enough of the job we do and the support we provide to see us as bona fide applicants. That meant a tremendous amount to us.

“Money doesn’t gravitate towards us like it might for some of the bigger response organisations. We are in a different league to those organisations and that’s OK as we enjoy providing a  community service.

“We were very effective during the Bangor-on-Dee floods because  we had already managed to get 14 responders flood awareness trained with the Defra 1 certificate. That meant we knew how to keep safe because we were following training given and not creating further problems for the emergency services.

“It makes a massive difference that we can now put more of our people through the training and that we can do it this year rather than in two years when we have fundraised.”

PACT launched in 1998 and works hand-in-hand with its key funders North Wales Police and North Wales’ Police and Crime Commissioner Arfon Jones to improve quality of life by reducing crime and fear of crime in the community.

The new report, Making an Impact, was commissioned by Ashley Rogers, PACT’s Chair of Trustees, who joined the charity in April last year and was keen to secure independent evidence of the impact of its work.

Conducted by Mike Corcoran, visiting researcher at Wrexham Glyndŵr University, the impact study involved an online survey of all those awarded with PACT funding during the past three years in addition to one-to-one interviews with organisations and a review of data and literature.

The findings are overwhelmingly positive, with 94% of projects reporting improved community relations following PACT support, 98% of projects positively impacting on policing priorities and 92% of respondents believing the wider community had benefitted from the intervention they had delivered through the charity.

Meanwhile, 75% of those interviewed said their projects would either not have happened or happened on a smaller scale without PACT.

Ashley Rogers, who is also Commercial Director of North Wales Mersey Dee Business Council, said: “This research confirmed the real value of the projects PACT supports at a time when improving the health and sustainability of our communities is now more important than ever.

“Although we are generally talking about smaller pots of cash, the turnaround for approvals is very quick which means communities benefit almost immediately. The catalyst PACT provides can make all the difference.

“We fund so many projects over the course of a year. We are not always the only funder and often look for a level of matched funding. Importantly, however, people are not volunteering their time to go through an arduous application process that goes above and beyond the time they would normally be contributing to a project.”

A key success for the charity is the Small Grant Fund which enables serving police officers and PCSOs to access small amounts of cash up to the value of £250 to support local grassroots community groups.

“It is not all about the funding, these small grants increase engagement with the local neighbourhood policing team and promote stronger links with the police overall,” explained Dave Evans, PACT Project Manager.

“We are also proud of Your Community Your Choice Awards, run in conjunction with the PCC, which put the public in the driving seat of who wins funding through an online voting system.

“Not only did we have the largest pot of funding this year at £60,000, we also had a record number of votes cast at 32,000 across North Wales which shows the level of positive community engagement PACT is achieving.”

With their own PACT grant, 4×4 Response Wales hopes to build on their roles and responsibilities in the future.

The group already has a Memorandum of Understanding with North Wales Police to support any requests for assistance during an emergency as well as other First Responder partners. It is also a member of the North Wales Resilience Forum’s Humanitarian Assistance and Volunteer Group and is available 365-days of the year if required.

“To have an NHS worker doing such a critical job for the nation saying thank you for driving through the snow seems to us strange and humbling. It was the same in Bangor-on-Dee when the residents were so pleased that someone was there to help while they were in difficulty,” said Vernon.

“It’s quite difficult to manage your emotions in those situations. It’s about community spirit but it’s also reward for your own efforts.”

“It is great to see that the research has been so helpful and enable PACT to be even more impactful moving forward. Working together in a quick and responsive way is key to supporting our communities and it is brilliant to play a part in such important work.”

Mike Corcoran added: “It was a pleasure to support PACT in the development of this report. Our communities are full of passionate and dedicated individuals, making a real difference to people’s lives.

“Through studies such as this we are able to shine a spotlight on their work, and develop insights that should help the impacts they achieve to be deeper and longer lasting.”