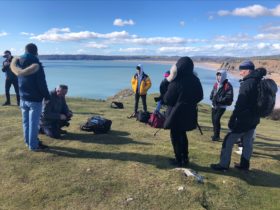 Tour de France champion Geraint Thomas and Giro d’Italia winner Chris Froome will ride together in the OVO Energy Tour of Britain for the first time since 2009, Team Sky have announced.

Newport hosts the finish of the first stage of the prestigious and high profile event on the afternoon of Sunday 2 September. For more info visit www.newport.gov.uk/events

The British pair, who placed first and third in July’s Tour de France, will both be on the start line of Britain’s biggest annual sporting event in Pembrey Country Park, Carmarthenshire.

They will be joined by Dutchman Wout Poels, himself a three-time stage winner in the race, including the hill-top finishes at Hartside and Haytor. The rest of the Team Sky line-up will be announced in due course.

“We’re honoured and thrilled that Geraint Thomas and Chris Froome will lead Team Sky at this year’s OVO Energy Tour of Britain.

“To have two of Britain’s greatest ever riders – the reigning Tour de France and Giro d’Italia winners no less – competing in the race is fantastic news for our fans, who will line the streets in order to catch a glimpse of the heroes.

“We saw the amazing response that Geraint received during his homecoming celebrations in Cardiff last week – the fact that Stage One on Sunday 2 September takes place entirely within Wales means the whole country will be able to celebrate his incredible success in France from the summer.”

For the second year running, each stage of the race will be shown live and in full on ITV4. Presenter Matt Barbet will be joined former pro rider Yanto Barker and Rebecca Charlton, with Marty MacDonald and Rob Hayles providing the commentary. Eurosport will also air daily live coverage.