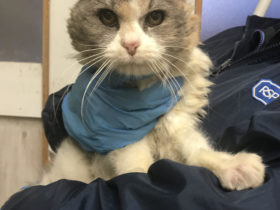 Search for owner of matted cat found in Clynderwen

An “incredible” woman who was born during the First World War has celebrated her 102nd birthday – with a glass of her favourite sweet sherry.

According to Martha Elizabeth Hughes, known as Bessie, enjoying an occasional tipple and going for regular walks are among the secrets of her longevity.

She lived independently in Brymbo, near Wrexham, where she was born and bred, until she was 101 and moved to Pendine Park’s Hillbury Care Home due to failing eyesight and suffering a fractured hip after a fall.
When she was 100 she received a birthday card from her favourite author, Jeffrey Archer, after the family contacted him.

They also got in touch with opera singer Wynne Evans, better known as Gio Compario from the Go Compare TV ads, and he went to her house to sing to her and recorded an interview for his radio show.

Mrs Hughes, who was widowed 40 years ago, was surrounded by friends, family and staff at her 102nd birthday party at Hillbury.

Among those helping her to celebrate were her great great niece, Emma Roberts, who works as an admin assistant at Pendine Park and Emma’s mum, Myra Campion a retired member of the care support team at Pendine Park.

“She is incredible. I live just down the road from where she lived in Brymbo and would call to see her three or four times a week. The trouble was I’d be lucky to catch her in once in every four visits.
“She’d be out having her hair done, shopping, visiting friends or be at Brymbo WI, she was always active.
“She was also a keen member of Brymbo Luncheon Club but her eye sight has really gone poor now and she’s struggled after her fall and now uses a wheelchair a great deal.
“Most of the family live in and around Brymbo so she always had lots of visitors and now she is in Hillbury House we call and see her regularly. She likes it here and she is very well cared for. She even had a visit from Brymbo WI members to help her celebrate her birthday.
“She is incredible and really switched on. She has a wonderful memory and keeps us amused with lots of stories from her past.”

According to Mrs Hughes, she had a strict upbringing and never smoked because her parents didn’t allow it.
She said: “My parents were very old fashioned and would have gone mad if I’d smoked but I didn’t want to anyway. They sent me to chapel every week; I had no choice, you did as you were told.

“And school was very strict too. If you were naughty you had your knuckles rapped with a ruler or stick. There was no messing around!

“I married my husband Raymond who was also a steelworker but we never had any children. I was a housewife and that was it.

“I like it at Hillbury, I was starting to struggle a bit on my own. The staff here are very kind and I’m looked after well.

“I like to read a lot. I like a good mystery or romance. Jeffrey Archer is my favourite author. In fact, on my 100th birthday I had a signed card of him.

“And also on my 100th birthday Wynne Evans, the Welsh tenor who does the TV adverts, came to my house and sang for me. We had a chat that was on his radio show, which was nice.

“I’m lucky because all my nephews, nieces and their children visit me a lot and my friends from the WI call in too. I’m quite happy here and like it a lot.”

Emma Roberts said: “She’s a remarkable lady and was so independent until very recently. She has an incredible memory and tells us all so many stories.

“She is head of around six generations of her extended family and we all love her a great deal.

“We are all really pleased she is at Hillbury House and she clearly likes it here and is so well cared for. I think she likes the fact she has made new friends after such a long time living on her own, although she was always out and about around Brymbo anyway.”

“I’m so pleased we managed to get her into Hillbury House, she likes it here and is so well cared for.“It’s been fabulous all the family getting together and enjoying a birthday party with Bessie. She really is a remarkable lady.”
Hillbury manager Cindy Clutton described Mrs Hughes as “a wonderful lady”.
She said: “She only came to us in May, at 101 years young, after leaving hospital flowing treatment for her hip fracture. She’s settled in so well and is popular with both residents and staff.
“It’s lovely to see so many members of her extended family here today helping her celebrate what is an amazing achievement.
“Bessie has an incredible memory and her only issues are her mobility and failing eyesight. I’m delighted she has settled in so well and hope she remains a resident here for many more years.”