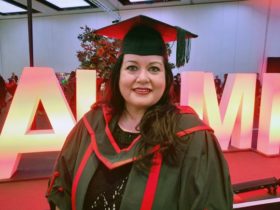 A WELSH Ambulance Service paramedic has been left feeling “eternally grateful” to the colleague who saved his life when he choked on his dinner.

And what’s more, Gareth Jones, of Tenby, wasn’t even supposed to be working with his saviour, paramedic Hayley Bennett that day.

Gareth, 42, and based at Tenby station was part way through his 3pm-3am shift in one of the service’s rapid response cars and had returned to base for his rest break.

Hearing that a colleague in Pembroke Dock had called in sick, leaving Hayley to work her overnight 6pm-6am shift alone, Gareth phoned their duty manager and offered to team up with Hayley for the rest of his shift.

It was agreed Hayley would head over to Tenby after her next call to join Gareth to form an emergency ambulance crew.

“It was around 8pm when I walked in and Gareth was sat eating his dinner,” said Hayley, 39.

“We began talking and he just started choking.

“I knew he was in trouble straight away.

“His face was bright red and his eyes were bulging.

“He’d jumped out of his seat and was hammering on his chest.”

“Back slaps to start with, and really shouting at him to cough as he was trying to breathe in.

“I moved on to the Heimlich maneuver but it dislodged nothing.

“I returned to back slaps quickly and eventually he vomited which cleared his airways.”

Gareth, who has served 21 years with the Welsh Ambulance Service, said: “It frightened the hell out of me.

“I’d read about the impending sense of doom in text books, and that’s exactly what I had.

“I thought I was leaving my wife and kids.

“Without her, my wife would be a widow and my kids would have no father.”

After the incident, the pair stood there in disbelief and both have since admitted that what was over in a couple of minutes felt like a lifetime whilst it was happening.

Hayley said: “I think it felt like such a long time as we were there alone.

“It was one of the most bizarre things that’s ever happened to me – I’ve never had to work on a colleague before.

“It was shocking really, I wasn’t supposed to be there.”

Gareth said: “Someone was looking after me that night.

“They would have found me dead on the station floor if Hayley hadn’t arrived as there was no other medically trained people there that night.”

Whilst Gareth was recuperating, the radio went off and a top priority Red call had come in.

So whilst still reeling from the shock and with Gareth physically recovering, the pair rushed to their ambulance and set off to a seriously ill patient.

“I was still coming down really,” said Gareth.

“I had what was called inspiratory stridor or a high pitch voice as the airway was still partially obstructed.

“It took a little while for that to go.

“Hayley got me a drink and I was starting to feel a little better when I heard our pin number on the radio.

“Hayley joked it was for me, but we were on our way to a Red call.”

Gareth went on to make a good recovery and has recently completed a Masters in Advanced Paramedic Practice.

Choking – Do you know what to do?

Do you know what to do in a choking emergency? Here’s what you should do if you witness an adult choking: 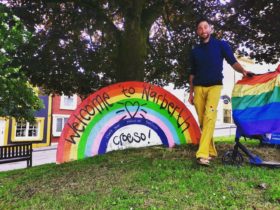