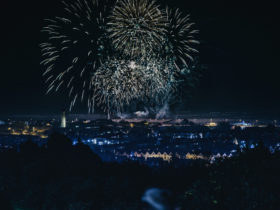 Everything you need to know about Swansea’s free fireworks display

A county lines drugs dealer who forced a London teenager to travel to Swansea to settle his brother’s drugs debt is today starting an eight-year jail term after admitting child trafficking.

Twenty-year-old Jerome Wallis pleaded guilty at Swansea Crown Court in December to arranging or facilitating the travel of a child with a view to exploit.

The conviction, under the Modern Slavery Act, is the first of its kind in Wales and only the second in the UK.

Wallis – who has a string of previous convictions, including one for child rape – also admitted to conspiring to supply both heroin and crack cocaine, and was sentenced today alongside co-accused Savion Browne, 25, who was also convicted of the conspiracy charges following a trial.

Browne was jailed for a six years for the drugs charges.

The court heard the two men, both from London, were part of a “sophisticated” county lines operation who were regularly travelling to Swansea in order to deal large quantities of Class A drugs.

Their involvement came to light in July last year, when a terrified 15-year-old – who cannot be identified for legal reasons – arrived at the front desk of Swansea Central Police Station and told officers he was missing from London and unable to get home.

During interview, he told officers Wallis – who he knew as ‘Chris’ – contacted him via Snapchat and asked him to assist with the sale of drugs as his brother had been remanded in prison.

The teenager declined the offer, but was essentially told he had no choice.

On July 12th he met Wallis in a lane near Paddington Station, and was told to get in his car. He was then driven to Swansea, where he spent days being moved around various addresses and sent out to complete drug deals.

On occasions when he returned with less money than expected, he was threatened with violence and told he would have to stay in the city for a year to recoup the money he owed.

The teenager took his chance to escape four days later, when Wallis returned to London to collect more drugs and the ‘minder’ who had be sent to watch him briefly left the property.

After approaching a security guard at a supermarket for directions, the boy made his way to the police station.

There he told officers about his ordeal and was also able to provide vital intelligence which later led officers to an address on Christina Street, where both Wallis and Savion Browne were arrested.

During a search of the address, officers found thousands of pounds in cash, knives, mobile phones and drug-related paraphernalia. Heroin and crack cocaine with a potential street value of almost £4,000, which had been thrown out of the window as officers raided the address, was also recovered.

“The victim in this case showed an incredible amount of bravery; firstly in fleeing the gang despite living under the constant threat of violence, and secondly in providing us with a detailed account which enabled us to quickly apprehend both Wallis and Browne and bring them to justice.

“Doing so was not easy for the victim. Gangs involved in county lines criminality deliberately target young and vulnerable children, whom they know are easy to groom, manipulate and control. Breaking free of a gang’s clutches often feels impossible to these young children.

“Even after he came forward to the police, the victim has lived in fear of reprisals and the case has had a huge impact on his life.

“I hope today’s sentencing provides him with some peace of mind and allows him to begin moving on with his life.”

Assistant Chief Constable Jonathan Drake, force lead for county lines, added: “Protecting the vulnerable is the priority of all priorities for South Wales Police. Serious organised crime groups look to exploit the most vulnerable members of our communities and often target children to further their illegal trade; no more so is this seen than in county lines criminality.

“Prosecuting these offences can be difficult as victims are often too frightened to talk about their ordeal or because they themselves do not recognise that they have been exploited.

“It is a credit to the victim and all those involved that this conviction is the first of its kind in Wales and demonstrates the lengths that we will go to prosecute those that seek to exploit the vulnerable.

“South Wales Police has worked closely with our partners to ensure that the signs of county lines and exploitation are recognised at the earliest available opportunity and to ensure that appropriate support is offered to victims, whilst also tackling this type of criminality in our communities.

“I would encourage anyone concerned around exploitation to contact us on 101 or Crimestoppers on 0800 555 111.”