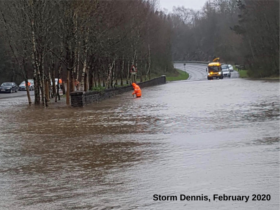 Gully upgrades on the A4059 between Abercynon and Mountain Ash

Forty cages full of food have been delivered to help households flooded in Storm Dennis, thanks the generosity of Tesco customers in Rhondda Cynon Taf.

The donations filled a Tesco delivery lorry twice over with shoppers in Tesco’s Pontypridd Extra, Talbot Green Extra and Aberdare Superstore, stacking box after box of donations for the Flood Relief Rhondda Cynon Taf appeal. Tesco topped up all the customer donations by an extra 20%, with thousands of meals-worth of food being donated.

The emergency in-store food appeal was launched at short notice, after Rhondda Cynon Taf Council approached local supermarkets on Monday of last week, asking for them to help provide food parcels to the hundreds of families who have seen their kitchens inundated with water in the recent flooding.

With many of those affected still left without fridges to store food, the collection in the three Tesco stores appealed for long-life items to help the more than 600 households affected.

“There is a great community spirit in Rhondda Cynon Taf, and our customers have shown that with their huge generosity,” he said. “People in this store gave 10 cages of food, and I don’t think I have ever seen donations mount up as quickly as they did on Saturday. We’d really like to thank every single person who gave, because everything they have given will make a difference to someone who has been affected.”

Volunteers from Rhondda Cynon Taf council and Tesco colleagues manned the collection points in the three stores from 9am to 5pm accepting donations from the community.

A Team of volunteers from the three Tesco stores then unloaded the two truckloads of donations at the council’s storage unit in Tonypandy where the donations will be sorted before being made up into food parcels.

“Even we were amazed at just how much food we collected when we unloaded it,” said Tesco Talbot Green Manager Huw Cowell, who was part of the team of volunteers. “We stacked the boxes six high and they almost filled the whole room.

“Everyone in the local Tesco stores has been happy that we have been able to help. We know people in our community have been affected really badly. A parcel of food may only make a small difference when you consider what people are going through, but it will make a difference, and that’s important.”