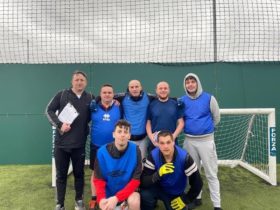 Rob Edwards has named a 20-player squad for Cymru’s first U18 match in more than twenty years when they play England on Monday 29 March (KO 12:00).

Several players selected were part of the U17 side that qualified for last season’s UEFA #U17EURO Elite Round, which was cancelled due to the COVID-19 pandemic. During the Qualifying Round, the squad featuring Oli Ewing, Ryan Viggars and Charlie Savage recorded an impressive 2-1 win against group favourites the Netherlands.

The side will be managed by Edwards, with players moving into the U19 setup for the 2021/22 season. The U18 setup has been relaunched to align with changes to UEFA’s tournament structure and to increase game time for age group international players. The last U18s match was a 2-0 win against Latvia in October 2000. The side was managed by Neville Southall and Cymru international Jermaine Easter was on the scoresheet.

There will also be an U17 training camp taking place during the March international window (21-25 March). The 22-player squad will be led by Matty Jones, with Rich Williams and Rob Edward as assistant coaches.

The Cymru v England match will be shown live on the FAW Facebook and YouTube channels, and will be played behind closed doors due to the ongoing COVID-19 pandemic.

“I’m really looking forward to working with the players and seeing their development. We take great pride in seeing players take the step up to the senior team and we hope to see more of that across the age groups. This group qualified for the U17 Elite Round which was unfortunately cancelled, but wins in the qualifiers against big teams like the Netherlands show that it’s a squad that can compete.” – Rob Edwards