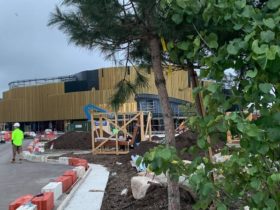 Dawn raids were carried out at sixteen addresses this morning, as part of an ongoing investigation in to spates of high-value burglaries in Swansea, Neath and Port Talbot.

Officers descended on addresses in the Morriston, Clase, Brynhyfryd, Fforestfach, city centre, and Bonymaen areas of Swansea as part of Operation Timmia.

Among the properties searched during the large-scale operation was an industrial unit in Fforestfach and nine caravans on the Millstream Way traveller site.

Six people have been arrested on suspicion of offences including conspiracy to commit burglary, and are currently in police custody. Enquiries are ongoing to locate further suspects.

Officers, who were assisted by the police helicopter, forensics teams, financial investigators and cash-detecting dogs, have so far seized three caravans, a cannabis cultivation, large amounts of cash and jewellery, and a number of other items believed to be linked to crimes.

Searches at some of the sites are currently ongoing.

Western BCU, which covers Swansea, Neath and Port Talbot, has seen a high number of burglaries and aggravated burglaries in the past year, and a dedicated team has worked closely with local partners and police forces across the UK to identify patterns of offending and those suspected to be responsible.

While the majority of burglaries were carried out at unoccupied houses, some homeowners came face-to-face with armed gangs who either threatened or inflicted violence.

“This morning’s raids were the result of a thorough and painstaking investigation, and were both carefully-planned and intelligence-led.

“We know the recent spates of burglaries and car thefts across the division has been of real concern in our local communities and I hope the scale of this morning’s enforcement action reassures the public that we do take the matter seriously and that we are fully committed to bringing those responsible to justice.

“We now have a number of individuals in custody and enquiries are ongoing to locate a number of outstanding suspects.”

Superintendent Cath Larkman added: “During some of the recent burglaries we’ve seen an increasing use of, or willingness to use, violence, so today’s action was absolutely proportionate and necessary to protect the public from further criminality and potential harm.”