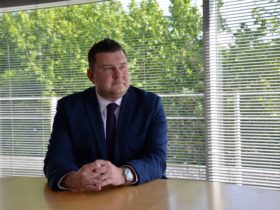 A DESIGNER and marketer has high hopes for the future after a raft of awards success.

Max Van Der Heiden, who stands at 6ft 4ins tall, is making a name for himself in the industry with his North Wales agency, Elixir.

Despite being just 25, Max has already been in business for three years after graduating from Bangor University with a Masters degree in Marketing.

Based in Llandudno, he got off to a flying start, picking up the Best Social Media Campaign prize at the North Wales Young Business Awards in 2016, for developing Snapchat Geofilters for the public to use in both Llandudno and Conwy.

And just last month he was nominated for New Business of The Year at Conwy Business Awards.

He plans to grow further in the next 12 months, taking on staff and moving to new premises.

“I started the business straight after university which was nerve wracking as most of my friends were walking into secure jobs, but ultimately it was the best thing I ever did,” he said.
“I’d say the first 18 months were a rollercoaster, especially in the beginning; there were a few teething problems as there are with any new company but I embraced the learning curve and was fortunate to start working with some brilliant people who showed a lot of faith in me.
“I have always believed by combining strategic design and effective marketing to give the clients maximum return on investment, and that’s something I’ll continue to do as I move forward.”

The future already includes a bigger workforce and office space.

“Yes, expansion is on the cards and of course Elixir will remain in North Wales,” said Max.

“This area is sometimes seen as behind the times, so along with other up-and-comers and more established, cutting-edge firms we want to change that perception, because it’s simply not the case.”

He added: “In today’s instant world you can work remotely – especially in the marketing, brand and design arena – so why not choose to work somewhere as beautiful as this region?”

“I’ve heard many people say that you need to move to the cities to get the clients and to be at the front line but with the internet and a direct train to London taking less than three hours I don’t agree.”

Admitting there is “never enough time” in the day, Max is now focused on growing his client base and has a few words for any other graduates planning to take the plunge and go it alone.

“Whilst you’re young you have so little to lose and there are so many ways to get started so why not take the risk. You can always go back to a secure job if it fails, but you have to be positive and believe that it won’t – it worked for me.”