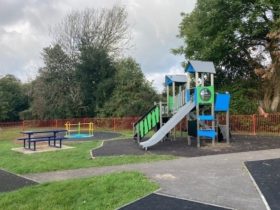 Further play area improvements to be delivered across RCT

End of season work is set to take place across the county’s wildflower meadows.

From the beginning of August, the second cut of the season will take place at the Council’s Wildflower Meadows Project sites.

This year’s season includes over a 100 managed wildflower meadows that have contributed to improved species richness across Denbighshire. These make up nearly 35 football pitches worth of native wildflower habitat.

Already this year the Council has recorded an early purple orchid, a pyramidal orchid and nine bee orchids on sites where they had previously not been recorded.

The project which is part of the Council’s wider Bee Friendly campaign is also in place to support the recovery of bees and other insect pollinators in the county.

As the flowering season is at the end, August will see Streescene staff visiting sites across the county carrying out cutting with specialist mowing equipment. The cuttings are removed off the meadow sites to help lower the richness of the soil and also support a low nutrient ground that our native wildflowers and grass need to grow.

Cllr Barry Mellor, Lead Member for Environment and Transport, said: “All of our sites are left uncut between March and August. Cutting late summer gives the flowers the chance to set seed to continue improving the biodiversity of the meadows they grow in.

“This also allows our Biodiversity team to collect seeds from sites to take back to the Council’s tree nursery for growing. Plants we grow from seed are used to further boost the biodiversity of sites across Denbighshire.

“We would like to thank everyone for their support for this important climate change project during the flowering season and look forward to seeing how the first batch of native plants grown at our nursery are introduced into sites over the coming months.”