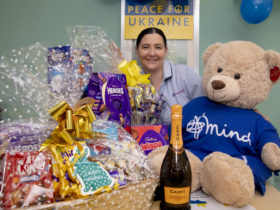 Tackling the 1085 metre giant, some of them three times in a row, fundraisers managed to raised £1344.

“This was another fantastic challenge our staff and members have set themselves to raise money for our charities. And I thank the team, who either walked or were involved in a supporting role, for their continued support and excellent effort”.