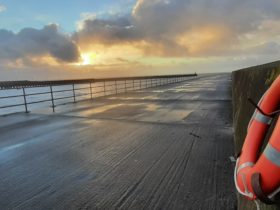 A group of artistic care home residents have come up with a touching tribute to Second World War hero Bill Evans by making cascades of giant poppies in his memory.

Bill, 93, who fought his way through Europe and helped liberate Brussels, died on Monday, October 15, after a short illness at Wrexham Maelor Hospital.

He was a popular resident at Pendine Park’s Gwern Alyn care home and two years ago unveiled a “weeping wall” of poppies outside the Penybryn care home in time for Remembrance Sunday.

This year the poppy displays will be sited outside several of Pendine Park’s care homes as a way of commemorating the 100th anniversary of the end of the First World War.

The residents making the poppies, some of which measure 18 inches across, are also dedicating them to Bill.
A native of Kerry near Newtown, Bill joined the Army in 1943 and saw action in France, Belgium, Holland and Germany.

Speaking in 2016 after being invited to a garden party at Buckingham Palace to celebrate the Queen’s 90th birthday, the former Royal Welsh Fusilier said the war was ‘very difficult’ and left him with ‘a lot of very painful memories’.

In the same year, he also met First Minister Carwyn Jones when he visited Gwern Alyn, and he helped to launch the annual Poppy Appeal in Wrexham.

Pendine Park artist in residence Sarah Edwards came up with the idea of the poppy displays after her art class residents said how much they had enjoyed making forget-me-not flowers which were used to decorate St Asaph Cathedral during the recent North Wales International Music Festival.

She said: “The theme of the music festival was all about reflecting on the Great War which is particularly poignant this year as it’s the 100th anniversary of the Armistice.

‘Residents made forget-me-not flowers out of card which they painted and then filled with a collage of images from the First World War.

“Residents really enjoyed making the flowers and took real pride in what they accomplished. It was residents who asked if we could do something similar to commemorate Remembrance Sunday this year.

“After we started the project sadly Bill Evans passed away so we are also dedicating the displays to his memory. It seemed right and proper that we did so taking into account what Bill went through during the Second World War.”

She added: “We are making the poppies in a different way than the forget-me-nots. We are using coffee filter paper which we are shaping and painting and then using card and papier mȃché to make the centres.

“We are making different poppies in different sizes and the larger ones will have collages of images depicting scenes from the Great War.

“So far we have made a few hundred poppies and have a lot of work to do to make the 1,000 or so we need for the displays.

‘The displays are going to be in the entrance to the Summerhill site care homes and we are going to send some down to Gwern Alyn where Bill lived.

“Bill was such a lovely man and a very big part of the Pendine family. He will be missed there is no doubt about that and we should honour his memory.”

Jen Roberts, manager at Gwern Alyn, said: “Bill was an amazing and lovely man and it’s touching that Sarah and the residents have thought of him and are preparing to honour his memory in such a lovely way.

“I’m sure Bill would have been delighted although he was always a very modest man. I’m looking forward to receiving some of the poppies the residents have made so we can display them here at Gwern Alyn in Bill’s memory too.”

Highfield House resident Marian Randle, 91, took time out from painting poppies to say: “Remembering the sacrifice so many people made during the two wars is very important and it’s definitely something we should do.
Bryn Bella resident Sian Ferrier, 47, said: “I always enjoy art projects and it’s important as it helps those residents who struggle with disabilities with dexterity.

“And we are always keen to do something for Remembrance Day as they gave up their tomorrows for our todays.”