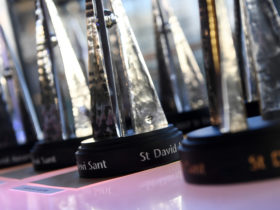 Flight Club is set to open its Social Darts venue in Cardiff this autumn it has been revealed today.

Flight Club has signed a 25-year lease for 16,327 sq ft of space, including a 4,000 sq ft panoramic roof terrace, at 3-4 St Mary Street. Flight Club Cardiff will be the company’s 10th venue in the UK and its largest outside London.

The spectacular venue will house 13 oches and has a total guest capacity of 500, with 3 feature bars and brunch served every Thursday-Sunday. Flight Club’s supercharged version of the traditional game involves a series of multiplayer games using unique patented dart tracking technology designed by Flight Club’s very own astrophysicist with up to 12 people playing at once.

What you need to know

CEO, Steve Moore, who co-founded Flight Club alongside Paul Barham, said: “We are delighted to reveal that we are opening the doors to Flight Club Cardiff in October! It is set to be our biggest venue yet, and we are looking forward to welcoming everyone up to the throwline.”

“Cardiff has already got an incredible hospitality scene that we’re thrilled to be joining, bringing something new to the neighbourhood and contributing to a thriving night life scene”