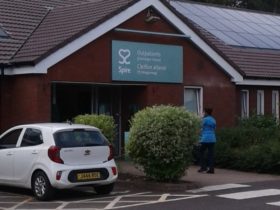 The British Heart Foundation Home Plus store in Crwys Road, Cardiff, has been forced to close temporarily after a break in and theft of water pipes at the adjoining vacant shop unit led to extensive flood damage. It’s likely that the store will remain closed for several weeks, but the charity has stressed that a clean-up operation is underway so the shop can reopen as soon as possible.

Lawrence Turner, Area Manager at the British Heart Foundation (BHF), said: “Unfortunately, on Saturday morning [8th January] the Crwys Road team arrived at work to find a catastrophic flood had taken place and was still on-going in our Home Plus store.

“This had been caused by intruders who broke into the vacant Co-Op building adjacent to our unit. It appears they were attempting to steal the copper piping from the empty unit and have cut the water pipe below the stop tap level meaning that water was pumping into the building with no means of turning it off except from the mains outside the building.

“By the time the team arrived on Saturday morning approximately 90% of the shop floor and parts of the warehouse had been covered in water.

“We have been incredibly grateful for the support of our team – volunteers and staff alike, who have pulled together for what will be a huge clean-up operation. Unfortunately, the damage is so extensive, we have been forced to close the store temporarily.”

Head of BHF Cymru, Adam Fletcher said, “The flooding at our Crwys Road store has been really disheartening for the whole team. It has caused a huge amount of damage and will cost thousands of pounds to repair, taking money away from the BHF’s vital work. The coronavirus crisis has already had a devastating impact on the BHF’s income following the temporary closure of our shops during lockdown, leading to a reduction in research funding and delays to vital scientific breakthroughs. It was also really upsetting for all the staff and volunteers.

“I’d like to thank the whole community on behalf of everyone at the BHF for all their support as we look to reopen our shop as soon as possible. It’s only because of our generous supporters that we are able to continue trading and funding life saving research into heart and circulatory diseases. We look forward to welcoming customers back to our shop once the clean-up operation has been completed.”