Memories of loved ones to shine in Sparkle Walk

Former royal harpist Hannah Stone will be one of the stars illuminating a top music festival.

The gifted virtuosa will be playing a harp concerto written by Anglesey composer Gareth Glyn at the North Wales International Music Festival at St Asaph Cathedral on Saturday, September 17.

The piece tells the story of Amaterasu who is the goddess of light in the Japanese Shinto religion.

The concerto was commissioned by the festival and premiered back in 2015 by Hannah Stone and she will once again be accompanied by the BBC National Orchestra of Wales.

The performance will launch this year’s festival which celebrates its 50th anniversary this year and runs until October 1.

Among the other highlights are performances by early music group Red Priest, award winning Welsh folk band Calan, the spectacular Mugenkyo Taiko Drummers, and resident orchestra NEW Sinfonia who will be performing with the National Youth Chamber Choir of Great Britain.

According to Hannah Stone, the story of Amaterasu is an extremely long and complex tale.

She said: “Basically Amaterasu has an argument with her unpredictable brother. They disagree and the brother gets ever angrier and wreaks havoc across the world.

“The brother then throws a pony through the roof of the workshop in which Amaterasu is working and she is so frightened she goes into a cave and rolls a huge rock in front of the entrance which plunges the world into darkness.

“The other gods hold a meeting and decide to hold a party outside the cave. Amaterasu becomes curious and rolls back the stone and once again light and colour fills the earth.”

Gareth Glyn was commissioned to compose the piece by the festival and since its premiere it has been included in Hannah Stone’s repertoire.

She said: “I have worked with the BBC National Orchestra of Wales on the piece since the premiere. We recorded it in 2019 and have played it since then in concerts.

Hannah has been a regular performer at the North Wales International Festival and says she loves playing in cathedrals and churches.

“Acoustically, St Asaph Cathedral is brilliant and I think the harp blends itself to that kind of setting and it’s probably one of my favourite places really to play.

“Sometimes in concert halls, especially modern places, people try and play with the acoustics and sometimes get them right and sometimes they don’t but with older buildings like churches and cathedrals you’re on to a winner.”

She said: “The opening concert starts with the Oberon Overture by Weber which was the very first piece performed at the first festival back in 1972. The orchestra was then called the BBC Welsh Orchestra.

She was the official harpist to the Prince of Wales from 2011 to 2015, and has performed at many prestigious venues, including the Royal Albert Hall and the Wales Millennium Centre in Cardiff, as well as appearing as a guest soloist with many leading orchestras.

In addition to performing for members of the Royal Family, she also played for Barack Obama, Angela Merkel and David Cameron at the 2014 NATO Conference at Cardiff Castle.

Currently she is busy with concerts and recitals, some of them with her husband, opera superstar Sir Bryn Terfel. 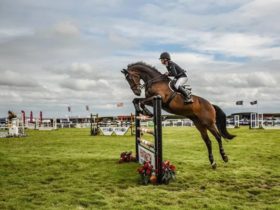