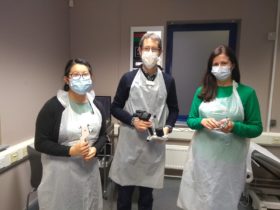 Health board to provide optometry service for the homeless

As work continues on the first phase of Plasdŵr, the sustainable community being created over the next 20 years in north west Cardiff, the developers have partnered with local business The Bike Shed to offer every household a £50 cycle voucher.

The voucher can be redeemed, against the purchase of a bike, helmets or safety gear, at The Bike Shed store on Cathedral Road, in Pontcanna.

Each Plasdŵr home is also provided with one free annual bus pass, with both benefits part of Plasdŵr’s commitment to its own and Cardiff Council’s active travel ambitions.

The plan for movement within Plasdŵr – which will eventually be a community of 7000 homes – has been designed to make walking, cycling and public transport being the easiest way to get around.

Cardiff Council is encouraging citizens to travel around the city with half the journeys being on bike or on public transport.

Richard Lansdown a director of The Bike Shed said:

“Plasdŵr will be the only area that we are aware of in Cardiff designed with active travel in mind from the start.

“We’re a local business and heavily involved in the cycling community here in Cardiff and we’re really delighted to be part of the foundation of Plasdŵr”.

Plasdŵr is inspired by the original garden city movement principles of “fresh air, sunlight, breathing room and playing room” and will be made up of around 40% green space. It is a key part of the economic development of the capital under Cardiff Council’s Local Development Plan and the vision is to create a “world-class, sustainable community where people can work, live and play”.

Its 900 acre community, bordering Fairwater, St Fagans, Danescourt and Radyr, will take shape gradually over the next 20 years and will include schools, one main district centre and three smaller local centres home to shops, offices, bars, pubs, restaurants, health and leisure centres.

“It was important for us to partner with a local independent business who understands the local environment for cyclists. It’s difficult for our first residents to envisage how travel will be within Plasdŵr at this early stage, but they have been really pleased to receive their vouchers and bus passes which they say will encourage them to use alternative modes of transport.

“There’s a really active cycling community already in Cardiff, and schemes such as nextbikes, with more than 7000 people signing up since launching in May, have shown that people are happily embracing active travel.”