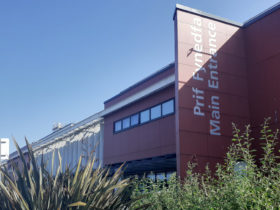 Technology developed in a Welsh university by a undergraduate student has the potential to help thousands of diabetics patients suffering diabetic foot ulcerations.

David Barton, who lives in Swansea is co-founder and director of Kaydiar, was studying podiatry medicine at Cardiff Metropolitan University when he came up with his device, which has now won the backing of a multinational firm.

It is hoped the device, which fits into a patient’s shoe, will aid healing for tens of thousands of people with diabetic foot ulcerations by offloading pressure.

David, 24, says the product has “been his life” for the last few years and he is determined to see the medical offloading insole used by the NHS.

An estimated 350,000 people in the UK have diabetic foot ulcerations, which can lead to the need for patients to have amputations. Providing people with a device to limit the effects of the ulcerations has the potential to help millions worldwide.

It is one of the reasons self-described “problem-solver” David has been so passionate about his invention. While on his course, David had come up with “some good sketches and good designs”.

Once he had developed his idea, he “took a bit of a risk” by investing in a 3D printer and 3-D modelling software. To save costs, the young entrepreneur was living with his parents while he spent all his time working on his device, coming up with a viable prototype.

It was then that the idea really began to take off and he was able to establish his start-up business, Kaydiar.

“I was approached by one of the doctors at the university who saw potential in the prototype and that’s when my business partner, Heather and I started up this business.

“And that was when we were set up with the Centre for Entrepreneurship at Cardiff Met, which gave us access to all kinds of advice.”

It was there that David, and business partner (co-founder and director) Heather Smart, used the advice and support of the Welsh Government’s Accelerated Growth Programme (AGP), which aided the business’ development from idea to manufacturing.

In June 2018, Kaydiar scooped an ESTnet (Electronic and Software Technologies Network for Wales) Tech Prize – which triggered interest from his investors.

“The award was important for us because we managed to get a plc partner and they have made an investment in our project,” said David.

“We have gone through exponential growth in the last few months and have overcome massive challenges and learning curves.

“AGP has helped support us in that, covering valuable business advice and legal costs.”

The device is designed and manufactured in Wales as it undergoes a product evaluation in the NHS after “excellent” results from tests at the university.

Originally from Kent, David’s parents retired to Wales during his time at university, meaning he could move in with them and put all his money into the invention.

“I was continually prototyping and finally brought a concept to life, which demonstrated excellent results for pressure redistribution.

“I have worked on this without pay for the two-and-a-half years. This is my life, and I love it.

“With my business partner Heather, we have built the business to what it is. It’s growing fast, and we have big ambitions.”

David says he loves Wales and wants his business to remain in the country.

David Notley of the Excelerator Consortium, which delivers the Accelerated Growth Programme, said Kaydiar was an excellent example of an idea emerging from a Welsh university having the potential to help people with a chronic condition:

“Working with a young entrepreneur like David shows the kind of potential we have here in Wales.

“Things are at a delicate stage at the moment, but Kaydiar has the potential to be a global leader in its field.

“AGP has been able to help in the early stages of its growth by providing it with business advice and support for the legal costs associated with bringing an idea like David’s to life.

“These are really exciting times for Kaydiar, and it’s been fantastic to be able to work with this start-up firm.”