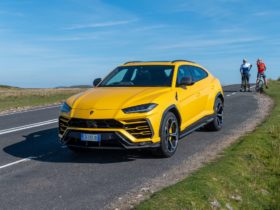 The Lamborghini Urus is probably the ultimate “boys toy”

Having already won the opening three rounds of the series, Hirst and co-driver Declan Dear were once again on unbeatable form, scoring maximum points on the Builth Wells-based event in their Pirelli-shod Delta Salvage Ford Fiesta R5+.

“This is the first time that we’ve ever had a clean run on the Nicky Grist Stages and I’m delighted to come home with victory and maximum points. We were even able to ease off on the last stage because by then there was nothing to gain and everything to lose,” said Hirst.

“The Welsh Championship is looking good for us now, but it’s certainly by no means over. We haven’t won the title yet and we must maintain our focus if we want to bring the title home.”

James Giddings once again finished on the podium after a great run in his Group N Fordpad Mitsubishi Evo 9. Partnered by Lee Taylor, he collected third-place in the overall standings and won the Ravenol Welsh Challenge category.

Robert Wilson was a very close fourth in his Ravenol Mitsubishi Evo 7 and, for the second time this year, won the OnThePaceNote.co.uk supported Welsh Junior category.

Co-driven by Richard Crozier, the youngster was delighted with the result, especially as he felt that, for the first time, the car was working perfectly and he felt comfortable and confident behind the wheel.