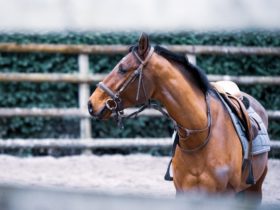 How to Bet on Belmont Stakes Horse Race

In a closely contested final against fellow Welshman and former touring professional Chris Lewis, Hoyt edged a tight first set 7-6.  He then gradually asserted his dominance in the second set to take it 6-2 and claim the title.

Hoyt has just recently returned to the professionals men’s circuit after an 18 month lay-off with a shoulder injury and is now working on getting his world ranking up again and potentially earning himself a position in the Wimbledon qualifying draw at the end of June. In the ladies final, world ranked Tiffany William from North London defeated Katherine Barnes from Norfolk 6-1 7-6.

The tournament, which is sponsored by tennis court manufacturers Chiltern Sports, was in its first year and was hosted by the Penarth Windsor Tennis Club in what is now the highest level tennis tournament in Wales.

The tournament attracted significant spectator interest throughout the week in support of the local Welsh players, and there were over 200 people in attendance on a busy finals day.

The tournament was met with a very positive reaction from players, spectators, and supporters, and Andy Burrell, from Chiltern Sports Contractors said

“I’m proud to have been part of it and have no doubt it will be even bigger and better next year”.

The players also gave the event strong endorsement and appreciated the positive atmosphere of the tournament. Following his win in the final, Hoyt said

“It was lovely to play in front of a big crowd here. I’ve played British Tour events before where you play the final and there’s been one man and a dog watching. So it’s been great to have a big crowd watching, a home crowd, and to have two Welsh players in the final”.

The tournament also saw some strong performances from several other young Welsh players. Teenager Kimberly Mpukusa, from Swansea, performed strongly to reach the ladies semi-finals where she pushed the eventual champion Tiffany William extremely hard in both sets in a narrow 7-5 6-4 defeat.

Fellow Swansea teenager Elinor Beazley also performed well in winning through the qualifying rounds and then reaching the last 16 where she was within two points of defeating the number 3 seed.

“The tournament has been a fantastic success for Welsh tennis. We wanted an event that would allow some of our emerging young talent in Wales to get an opportunity within Wales to compete in a senior professional event. It’s been great to see Kimberly and Elinor really step up and get inspired by that opportunity. It’s also been fantastic for youngsters in Wales to be able to come along and watch someone like Evan Hoyt in action like that. Hopefully they will see that and want to try to do that themselves in the future. It’s great for Welsh tennis”.

The tournament will continue again next year, and Penarth Windsor Club Chairman and Tournament Director Anthony Phillips is already making plans for how to further develop the event.