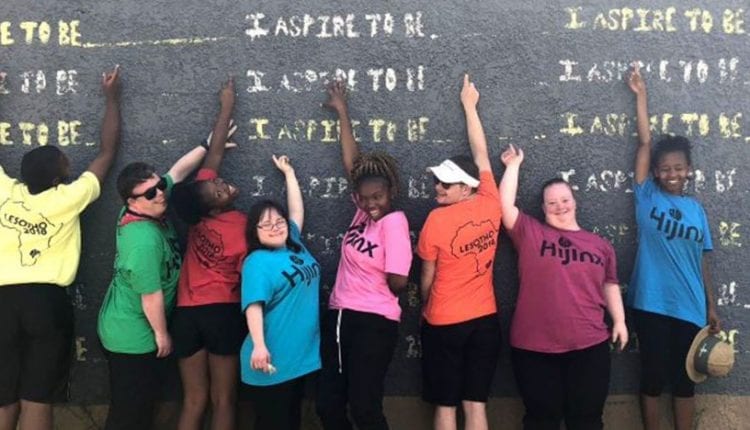 Cardiff based theatre company Hijinx, who use learning disabled and/or autistic actors in all of their productions, have won the 2019 International award from The Stage.

The award, presented to Hijinx at the Bridge Theatre in London on Friday 25thJanuary, recognised their fast-growing global presence in the arts industry.

2018 saw Hijinx visit 67 cities in 16 countries, with the ongoing tour of hit show Meet Fred, and a ground-breaking collaboration Africa.  In February 2018 four Hijinx actors with Down’s Syndrome went to Lesotho to create an inclusive theatre production with local drama students.  Its impact was phenomenal as vast swathes of Lesotho perceive disability as a curse, and babies with disabilities are often abandoned at orphanages.  Touring a production with visibly learning-disabled actors was an extraordinary act of courage and belief. The performance played to audiences of more than 2,000 people.

Meet Fred, Hijinx’s show about a potty-mouthed puppet, toured to over a dozen European countries before heading off to the US, South Korea and China. It has now been translated into eight languages and has performed more than 200 times. Whilst in China and South Korea the company facilitated workshops and seminars with local learning-disability groups to share their unique methodology and business model. There are plans afoot to roll out that model across a number of different countries.

“We are thrilled to receive this International theatre award. Gaining recognition for our world-class productions has been an important stepping stone in our mission to show that people who have an intellectual disability or who identify as neurodivergent can become professional performers and be cast in theatre, TV and film projects across the world.

“We are continuing this work with our brand new physical theatre production Into The Light, which stars an inclusive cast of actors from Wales, Italy and Spain. In collaboration with Italy’s Teatro La Ribalta and in association with Spain’s Danza Mobile, as well as the renowned Frantic Assembly and Sherman Theatre, we are presenting a bold and beautiful production on the universal struggle to be seen and heard.

“Into The Light demonstrates the extraordinary natural talent of people who are often overlooked as not capable of undertaking professional work. This production will tour the globe extensively in the coming months.”

In October 2018, Hijinx unveiled their new casting standards for the film industry, announcing their hopes to see a learning disabled actor win an Academy Award by 2030. Their casting platform, Hijinx Actors, is the UK’s largest casting platform for neurodivergent actors, with over 60 professional actors ready to star in TV, film, and theatre productions.