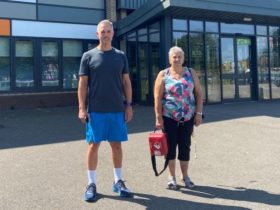 A MECHANIC who switched gears on her career to join the Welsh Ambulance Service is encouraging others to apply for a role.

Helen Pritchard, 42, of Bala, was a mechanic and later a teaching assistant at Ysgol Dinas Bran in Llangollen before joining the ambulance service as an urgent care assistant.

The mum-of-three is now training to become an emergency medical technician, and has ambitions to qualify as a paramedic.

She is encouraging others to apply for a role at the service.

Helen said: “I’d always wanted a job in the ambulance service but I thought there’d be no point in applying because I hadn’t done well at school – I didn’t have a single GCSE.

“I was a mechanic for several years before I pursued a Level 3 Diploma in Child Development, and I actually sat my GCSEs in the school where I worked as a teaching assistant.

“As soon as I had those under my belt, I was in a position to apply to the ambulance service – and here I am.”

Helen joined the service in 2020 as an urgent care assistant in Bala, and is now training to become an emergency medical technician so that she can work alongside paramedics to deliver life-saving care in the community.

She said: “It was the fast-paced nature of the role which attracted me.

“I was also a first aider at the school, and felt proud to have the skills to be able to care for the children who were ill or injured – and sometimes the adults too.

“I love it at the Welsh Ambulance Service, and everyone has been so helpful and welcoming.

“My advice to anyone thinking about applying for a role is that it’s never too late in your career.

“Whatever your background and whatever you’ve done previously, it really doesn’t matter – I’m proof of that.”