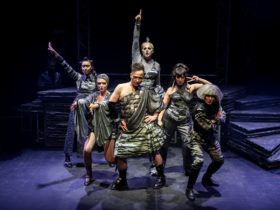 Manic Street Preachers, Nile Rodgers, The Killers, Paul Weller – the list of music legends that have played gigs to thousands of adoring fans at Cardiff Castle is pretty impressive, but with the Castle currently closed to visitors it’s now hosting a series of impromptu lockdown gigs, performed by a Cardiff Council worker during breaks on his night shifts as a security guard.

The acoustic gigs are being performed by Jodie Daniels under cover of darkness, in the empty grounds and Burges designed rooms, including some which aren’t generally accessible to the public, and then uploaded to YouTube for people to enjoy.

Many of the Castle’s most magnificent rooms, including The Great Hall and the Arab Room have hosted performances but one of Jodie’s favourite place to play is a little more unusual – the bathroom in the Grand Tower which according to the young musician has “great acoustics.”

Cover versions currently on YouTube include ‘I Want to Break Free’ by Queen, the Beatles’ ‘Come Together’, and ‘One Hand in my Pocket’ by Alanis Morissette.

Being a security guard, let alone gigging at Cardiff Castle, is a far cry from Jodie’s day job. Normally that involves acting as a guide to some of the hundreds of thousands of visitors who flock to the Castle each year, but with the Castle closed and reduced staffing levels due to Covid-19, he is one of hundreds of Council staff who have been redeployed into new roles so that essential services can continue to be delivered.

Jodie said: “Music and working at Cardiff Castle are two huge parts of my life but the transition from taking tours at the Castle and singing at different venues, to working through the night into the early hours of the morning, was slightly daunting at first.

“Being tasked as extra night security I was keen to use my time wisely and use some of the inspiring rooms, which are fabulous for natural acoustics, to write and sing during these unprecedented times.”

“I will admit it can be slightly unnerving late at night on patrol, when these old buildings tend to make most of their usual scary sounds.”

Cabinet Member for Culture and Leisure, Cllr Peter Bradbury said: “We’re really grateful to Jodie and the hundreds of staff across the Council who have been redeployed into new roles for stepping up to the challenges posed by Covid-19.”

“Cardiff Castle is one of the most popular tourist attractions in Wales, welcoming hundreds of thousands of people from across the world every year and we’re looking forward to it re-opening when this is all over.

“In the meantime it’s good to see that not only is the Castle being kept secure twenty four hours a day, it’s also still hosting events, even if they are on a slightly smaller scale than usual.”