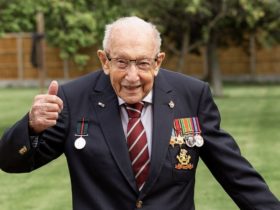 Anna-Louise Bates, 44, and Zachary Stubbings, 41, are encouraging family and friends to support two good causes very close to their hearts as they celebrate their marriage at Castell Coch at the end of May.

Believe Organ Donation Support was created by Anna-Louise from Thornhill in Cardiff, in memory of her late husband Stuart and their son Fraser, who both died in a road accident in December 2015.  Zachary met Anna-Louise when he came to collect a Fraser Bear, the charity’s mascot, after having a stem cell transplant as part of his treatment for blood cancer. The couple got chatting, and over the following months they fell in love.

Encouraged by Anna-Louise’s daughter Elizabeth, and supported by his sons Iestyn and Owynn, Zach proposed at Castell Coch last November.

They are not asking for presents from their wedding guests and have instead set up a fundraising page to raise money for Believe and Help for Heroes, a charity RAF veteran Zach has been supported by since he left the RAF after being diagnosed with blood cancer.

He was diagnosed in 2012 and the condition led him to being medically discharged from the forces.

Zach says “They thought I had an allergy to the new suits for work that we had been issued with but when the tests didn’t come up with anything, they did some blood screening.

“I was up a tree on the high ropes course on a Friday afternoon when I got a phone call from the senior medical officer to say to go to the medical centre first thing on Monday. It sounded serious but I had no idea why they wanted to see me.

“I had no symptoms, so it was a real shock when they diagnosed cancer. It is a type of cancer that you are never in remission with, but it can be active or non-active. I have regular blood tests to keep on top of it, but it did change my world completely.

“I was an instructor at the time of diagnosis and had plans to further my career but then I had to get moved to lighter duties and was discharged in 2015. It was a huge knock.

“Help for Heroes has been amazing because they get the message across that ‘you can still do this’ and I have met lots of people in a similar position to me.

“They helped me regain my purpose and helped me to become the person I am today.”

Anna-Louise created Believe to help educate and support those involved in organ donation.  She says, “Believe is helping me to build myself back up and to direct my energies into something powerful and important and to understand that life really is a gift and every second counts.

“Our guests at the wedding have believed in us both through the darkest time and that is why we want them at our celebration of life.”

In Wales, Help for Heroes have a dedicated team providing holistic support to men and women across the country, whose careers have been cut short due to illness or injury.

Based at the charity’s Community Recovery Office in Treforest, Recovery Manager Shelley Elgin says, “Our skilled staff work throughout Wales and Hereford, delivering life-changing services including welfare and career advice, 1-2-1 support, fellowship, sports recovery and clinical liaison. Every activity we offer is designed to improve the wellbeing of men and women who put their lives on the line for us, and we want to give them a second chance at life, for them, and their families.”

Every week the charity facilitates community hubs, events and workshops which can develop camaraderie and inspire, enable and support this talented and valuable section of the community to live lives with purpose once more.

Ms Eglin adds, “Help for Heroes relies on the generosity of the public to support our work and we are incredibly grateful to everyone who takes time to volunteer to collect for us, hosts a sponsored event or activity to raise vital funds to Help for Heroes.”

“We are deeply touched by the incredible gesture of support from Anna-Louise and Zach in thinking of our servicemen and women as the celebrate their wedding. We are proud to have been able to support Zach during his transition from the Armed Forces, and our team is available to him, and other injured or ill veterans now and in the future, as the need arises.”

Anna-Louise and Zachary took part in a photoshoot with mascots representing both charities to encourage wedding guests and supporters to make donations in lieu of wedding gifts.

To make a donation in support of Believe and Help for Heroes through Anna-Louise and Zach’s fundraising page, please go to https://uk.virginmoneygiving.com/AnnaBates7