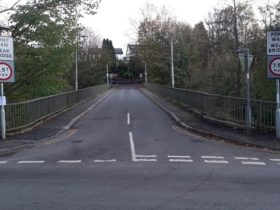 Trial repairs at White Bridge in Pontypridd to begin

A Talbot Green mother-of-two has been jailed for almost four years, after defrauding residents of nearly £200,000 via an unlawful PPI claims company.

Emma Meredith Hughes, of Heol Miles, was sentenced the year after she was ordered to pay £10,000 compensation to the victims of her previous business, who had paid for work that either never began, or was shoddy.

She appeared before Merthyr Tydfil Crown Court on November 12 for sentencing, after admitting at an earlier hearing a charge of participating in a fraudulent businesses,  namely NM Training Ltd, an offence under the 2006 Companies Act.

The severity of her sentence reflected the fact that 500 people, including the elderly and vulnerable, made payments to unregistered and unlawful NM Training Ltd totalling some £170,000.

NM Training Ltd contacted people and told them not only were they entitled to a refund, but also gave them the approximate figure they would receive.

Depending on the fake amount they were assured they would receive, customers made up front payments ranging from hundreds to thousands of pounds.

Ministry of Justice regulations surrounding the PPI industry – which Meredith Hughes would be aware of as she worked within the industry for some five years – state upfront payments can only be requested once a person has seen and agreed the full terms and conditions of their claim.

Further offences were committed when some of the “customers” were contacted a second time and informed their “High Claims Court” claim had been successful, but further payment would be needed to release the funds. This led to a further £17,000 being paid out, bringing the total sum of the fraud to £186,427.57

Meredith Hughes admitted the offences and was issued a custodial sentence of 40 months and was banned from being able to act as a director for 10 years. She was also issued with a Criminal Behaviour Order, prohibiting her from operating within the claims management industry.

The court was told of her previous convictions in January 2017, after which the sentencing judge described her as “persuasive and ruthless”.

The offences related to Glyndwr Home Improvements Ltd, of which she was a director, and involved aggressive commercial practices, offering credit without the license to do so and unsafe installations.

She was convicted alongside one of her salespeople of offences under the Consumer Protection from Unfair Trading Regulations 2008, the Consumer Credit Act of 1974 and the 2005 General Product Safety Regulations.

Complaints from customers included work not beginning or being completed after the payment of deposits, ignoring calls, letters and emails from customers and intimidating customers into paying more money, even though the contract was payment on completion.

People were told staff would not work, projects would not be completed and goods already installed would be removed if they did not pay up. Work that was delivered was not of the required standard and did not meet required standards.

As a result she received an eight-month prison sentence, suspended for two years and was ordered to pay £10,000 compensation. She was also disqualified from acting as a director for three years.

In court this month, Meredith Hughes’ defence told the court the business was used for cash flow, not to fund a lavish lifestyle and that she was naive and the way the business was run was “chaotic”.

She denied targeting the elderly, saying the business was random and used a random dialling system using landlines.

The court was also told the money taken was put back into the business and accounts show it has a loss of £6,000.

Defence also made clear that the offending itself is dated – Meredith Hughes was arrested in relation to it in 2015. During this time she has remained the main breadwinner for her family and has two children aged five and two.

Meredith Hughes had hoped the cases relating to NM Training Ltd and Glyndwr Home Improvements Ltd would be joined together but this was not the case. During this time she has lost her marriage and has ill health.

She told the court she accepts responsibility and does have remorse for what has happened. She submitted two references in relation to her character, mentioning her charitable work.

“Your stewardship of NM Training involved making money to which it was not entitled.

“The work of claim handlers is important, however, it is open to abuse and, as such, is regulated by the Ministry of Justice. You knew why and how the industry was regulated and ripped up the rule book by taking upfront fees, telling clients they were already entitled to a claim and extorting thousands of pounds off them.

“In sentencing I have anxiously bore in mind your two children and their right to a family life. However you had a leading role in the scheme, you were the prime mover. Due to the harm caused to your victims who have suffered natural distress and embarrassment from being scammed and due to the persistence of the scheme only an immediate custodial sentence can be justified.”

Paul Mee, Rhondda Cynon Taf Council’s Director of Public Health, Protection and Community Services, said: “This was a complex and lengthy case involving someone with previous convictions for costing residents money and providing a less than lawful business.

“The PPI industry is rightly subject to strict Government regulations, to protect consumers.

“In this case, people were told not only were they guaranteed a payment, they were told what that payment would be and asked to pay an upfront fee based on that. Then asked to pay out further to release the fake funds.

“It was only with the support of our officers and community services that we were able to get some of the money back for the victims, using their bank protections.

“PPI remains a prolific subject of many cold calls. People who do not wish to receive unsolicited sales calls – to their landline or their mobile number – can take advantage of a preferential calls service and should contact their service provider for more information.

“Those who do decide to proceed with a PPI claim must ensure they do not make any payments either upfront or to release their funds. If you are interested in a PPI offer made to you then please request all paperwork and terms and conditions are sent to you, so you can consider it carefully before proceeding.”